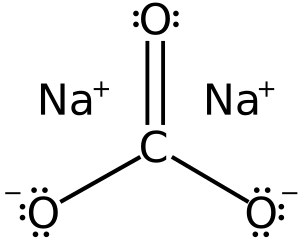 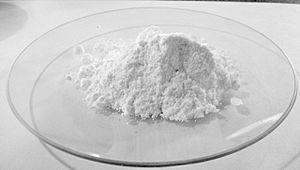 Sodium carbonate is a chemical compound. It is composed of sodium and carbonate ions. Its chemical formula is Na2CO3. It is a base. It reacts with acids to produce carbon dioxide. It is made by reacting sodium hydroxide with carbon dioxide or by heating sodium bicarbonate. It is produced industrially by the Solvay process. It is used to make glass. It is also used in pools and cooking. It is used as an electrolyte.

All content from Kiddle encyclopedia articles (including the article images and facts) can be freely used under Attribution-ShareAlike license, unless stated otherwise. Cite this article:
Sodium carbonate Facts for Kids. Kiddle Encyclopedia.