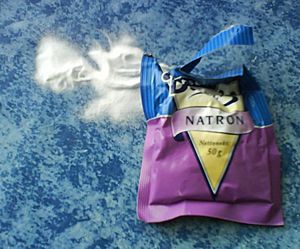 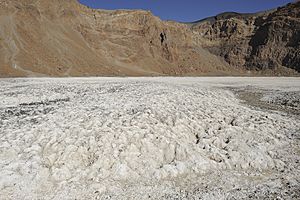 Natron deposits in the Era Kohor crater in the Tibesti Mountains, Chad 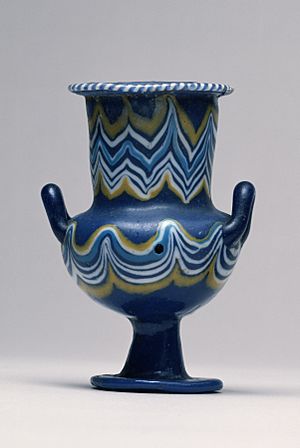 Natron is a natural mixture of sodium carbonate decahydrate (Na2CO3·10H2O, a kind of soda ash) and about 17% sodium bicarbonate (also called nahcolite or baking soda, NaHCO3) along with small amounts of household salt (halite, sodium chloride) and sodium sulfate. Natron is white or without color when it is pure. It can be gray or yellow with impurities. Natron deposits are sometimes found in saline (salty) lake beds which arose in arid environments. Throughout history natron has had many practical uses which are still used in the wide range of modern uses of its constituent mineral components.

In modern mineralogy the word natron has come to mean only the sodium carbonate decahydrate (hydrated soda ash) which makes up most of the historical salt.

The English word natron is a French cognate that came from the Spanish natrón through Greek νιτρων nitron, which came from the Ancient Egyptian word netjeri, meaning natron. The modern chemical symbol for sodium, Na, is an abbreviation of that element's New Latin name natrium, which came from natron.

Historical natron was harvested as a salt mixture from dry lake beds in Ancient Egypt and has been used for thousands of years as cleaning. Together with oil, it was an early form of soap. It softens water and removes oil and grease at the same time. Natron was also a cleanser for the teeth and an early mouthwash. The mineral was mixed into early antiseptics for wounds and minor cuts. Natron can be used to dry and preserve fish and meat. It was also an ancient household insecticide, was used for making leather and as a bleach for clothing.

The mineral was used in Egyptian mummification because it absorbs water and was a drying agent. Also, when exposed to moisture the carbonate in natron increases pH, which makes a good environment for bacteria. In some cultures, natron was thought to keep both the living and the dead spiritually safe. Natron was added to castor oil to make a smokeless fuel, which allowed Egyptian artisans to paint artworks inside ancient tombs without staining them with soot.

Natron is an ingredient for making a color called Egyptian blue. It was used with sand and lime in ceramic and glass-making by the Romans and others at least until 640 CE. The mineral was also used as a flux to solder precious metals together.

Most of natron's uses both in the home and by industry were replaced in time with closely related sodium compounds and minerals. Natron's detergent properties are now commercially supplied by soda ash, the mixture's chief compound ingredient, along with other chemicals. Soda ash also replaced natron in glass-making. Some of its ancient household roles are also now filled by ordinary baking soda, natron's other meaningful ingredient.

As a source of soda ash

All content from Kiddle encyclopedia articles (including the article images and facts) can be freely used under Attribution-ShareAlike license, unless stated otherwise. Cite this article:
Natron Facts for Kids. Kiddle Encyclopedia.