Chad (French: Tchad; Arabic: تشاد‎code: ar is deprecated , officially called the Republic of Chad), is a landlocked country in Central Africa. The capital is N'Djamena.

Arabic and French are the official languages. Islam and Christianity are the most widely practiced religions.

Chad has one of the highest levels of hunger in the world. Food insecurity is common in the country. 80% live in total poverty on less than a dollar a day, and 90% are unemployed in Chad. Chad has a low life expectancy. Life expectancy is 54 years old in Chad.

Chad is home to 134 kinds of mammals, 141 bird species, 52 kinds of reptiles, 30 amphibians and 130 kinds of fish. Many animals such as elephants, hippopotamuses, rhinoceroses, warthogs, giraffes, antelopes, lions, leopards, and cheetahs live in Chad. 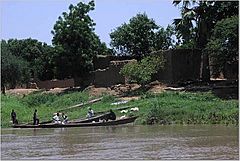 Chad is the world's 21st-largest country. It is slightly smaller than Peru and slightly larger than South Africa. To the north is Libya, to the south is the Central African Republic, to the east is Sudan, and to the west are Cameroon, Nigeria, and Niger.

The country's capital is 1,060 kilometres (660 mi) from the nearest seaport Douala, Cameroon. Due to this distance from the sea and the country's largely desert climate, Chad is sometimes called the "Dead Heart of Africa".

The region's tall grasses and large amount of marshes make it good for birds, reptiles, and large mammals. Chad's major rivers are the Chari and Logone.

Each year a tropical weather system known as the intertropical front crosses Chad from south to north, bringing a wet season that lasts from May to October in the south, and from June to September in the Sahel. Variations in local rainfall create three major geographical zones. The Sahara lies in the country's northern third. Yearly precipitations throughout this belt are under 50 millimetres (2.0 in); only occasional spontaneous palm groves survive, all of them south of the Tropic of Cancer.

The Sahara gives way to a Sahelian belt in Chad's centre; precipitation there varies from 300 to 600 mm (11.8 to 23.6 in) per year. In the Sahel, a steppe of thorny bushes (mostly acacias) gradually gives way to the south to East Sudanian savanna in Chad's Sudanese zone. Yearly rainfall in this belt is over 900 mm (35.4 in).

Chad's animal and plant life correspond to the three climatic zones. In the Saharan region, the only flora is the date-palm groves of the oasis. Palms and acacia trees grow in the Sahelian region. The southern, or Sudanic, zone consists of broad grasslands or prairies suitable for grazing. As of 2002, there were at least 134 species of mammals, 509 species of birds (354 species of residents and 155 migrants), and over 1,600 species of plants throughout the country.

Elephants, lions, buffalo, hippopotamuses, rhinoceroses, giraffes, antelopes, leopards, cheetahs, hyenas, and many species of snakes are found here, although most large carnivore populations have been drastically reduced since the early 20th century. Elephant poaching, particularly in the south of the country in areas such as Zakouma National Park, is a severe problem. The small group of surviving West African crocodiles in the Ennedi Plateau represents one of the last colonies known in the Sahara today.

Chad had a 2018 Forest Landscape Integrity Index mean score of 6.18/10, ranking it 83rd globally out of 172 countries. Extensive deforestation has resulted in loss of trees such as acacias, baobab, dates and palm trees. This has also caused loss of natural habitat for wild animals; one of the main reasons for this is also hunting and livestock farming by increasing human settlements. Populations of animals like lions, leopards and rhino have fallen significantly.

Efforts have been made by the Food and Agriculture Organization to improve relations between farmers, agro-pastoralists and pastoralists in the Zakouma National Park (ZNP), Siniaka-Minia, and Aouk reserve in southeastern Chad to promote sustainable development. As part of the national conservation effort, more than 1.2 million trees have been replanted to check the advancement of the desert, which incidentally also helps the local economy by way of financial return from acacia trees, which produce gum arabic, and also from fruit trees.

Poaching is a serious problem in the country, particularly of elephants for the profitable ivory industry and a threat to lives of rangers even in the national parks such as Zakouma. Elephants are often massacred in herds in and around the parks by organized poaching. The problem is worsened by the fact that the parks are understaffed and that a number of wardens have been murdered by poachers. 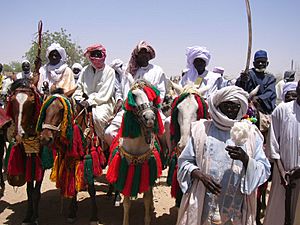 A tribal delegation in Chad

Toubou nomads in the Ennedi Mountains

Since 2002, the Republic of Chad has been divided into regions. It was previously divided into prefectures, and then departments.

The largest cities in Chad are:

Chad's official languages are Arabic and French, but over 100 languages and dialects are spoken. Due to the important role of Arab traders and merchants, Chadian Arabic has become a lingua franca, a language for all to use.

A proportional representation of Chad exports, 2019

The United Nations' Human Development Index ranks Chad as the seventh poorest country in the world, with 80% of the population living below the poverty line.

Chad's currency is the CFA franc.

In the 1960s, the mining industry of Chad produced sodium carbonate, or natron. There have also been reports of gold-bearing quartz in the Biltine Prefecture. However, years of civil war have scared away foreign investors; those who left Chad between 1979 and 1982 have only recently begun to regain confidence in the country's future. In 2000 major direct foreign investment in the oil sector began, boosting the country's economic prospects. 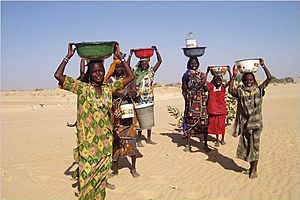 Women in Mao, where water is provided by a water tower. Access to clean water is often a problem in Chad.

Over 80% of Chad's population relies on subsistence farming and livestock raising for its livelihood. The crops grown and the locations of herds are determined by the local climate. In the southernmost 10% of the territory lies the nation's most fertile cropland, with rich yields of sorghum and millet. In the Sahel only the hardier varieties of millet grow, and with much lower yields than in the south. On the other hand, the Sahel is ideal pastureland for large herds of commercial cattle and for goats, sheep, donkeys and horses. The Sahara's scattered oases support only some dates and legumes. Chad's cities face serious difficulties of municipal infrastructure; only 48% of urban residents have access to potable water and only 2% to basic sanitation.

Before the development of oil industry, cotton dominated industry and the labour market accounted for approximately 80% of export earnings. Cotton remains a primary export. Other than cotton, cattle and gum arabic are dominant.

According to the United Nations, Chad has been affected by a humanitarian crisis since at least 2001. As of 2008[update], the country of Chad hosts over 280,000 refugees from the Sudan's Darfur region, over 55,000 from the Central African Republic, as well as over 170,000 internally displaced persons.

Educators face considerable challenges due to the nation's dispersed population and a certain degree of reluctance on the part of parents to send their children to school. Although attendance is compulsory, only 68 percent of boys attend primary school, and more than half of the population is illiterate. Higher education is provided at the University of N'Djamena. At 33 percent, Chad has one of the lowest literacy rates of Sub-Saharan Africa. 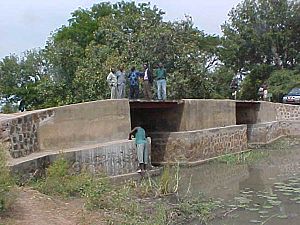 A bridge on the Bragoto River

Civil war crippled the development of transport infrastructure; in 1987, Chad had only 30 kilometres (19 mi) of paved roads. Successive road rehabilitation projects improved the network to 550 kilometres (340 mi) by 2004. Nevertheless, the road network is limited; roads are often unusable for several months of the year. With no railways of its own, Chad depends heavily on Cameroon's rail system for the transport of Chadian exports and imports to and from the seaport of Douala.

An airplane landing in Abéché

As of 2013[update] Chad had an estimated 59 airports, only 9 of which had paved runways. An international airport serves the capital and provides regular nonstop flights to Paris and several African cities. 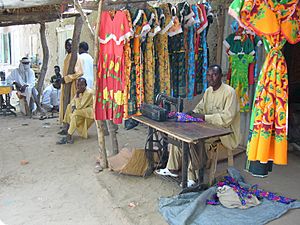 Because of its great variety of peoples and languages, Chad possesses a rich cultural heritage. The Chadian government has actively promoted Chadian culture and national traditions by opening the Chad National Museum and the Chad Cultural Centre. Six national holidays are observed throughout the year, and movable holidays include the Christian holiday of Easter Monday and the Muslim holidays of Eid ul-Fitr, Eid ul-Adha, and Eid Milad Nnabi.

Millet is the staple food of Chadian cuisine. It is used to make balls of paste that are dipped in sauces. In the north this dish is known as alysh; in the south, as biya. Fish is popular, which is generally prepared and sold either as salanga (sun-dried and lightly smoked Alestes and Hydrocynus) or as banda (smoked large fish). Carcaje is a popular sweet red tea extracted from hibiscus leaves. Alcoholic beverages, though absent in the north, are popular in the south, where people drink millet beer, known as billi-billi when brewed from red millet, and as coshate when from white millet.

The music of Chad includes a number of instruments such as the kinde, a type of bow harp; the kakaki, a long tin horn; and the hu hu, a stringed instrument that uses calabashes as loudspeakers. Other instruments and their combinations are more linked to specific ethnic groups: the Sara prefer whistles, balafones, harps and kodjo drums; and the Kanembu combine the sounds of drums with those of flute-like instruments.

The music group Chari Jazz formed in 1964 and initiated Chad's modern music scene. Later, more renowned groups such as African Melody and International Challal attempted to mix modernity and tradition. Popular groups such as Tibesti have clung faster to their heritage by drawing on sai, a traditional style of music from southern Chad. The people of Chad have customarily disdained modern music. However, in 1995 greater interest has developed and fostered the distribution of CDs and audio cassettes featuring Chadian artists. Piracy and a lack of legal protections for artists' rights remain problems to further development of the Chadian music industry.

As in other Sahelian countries, literature in Chad has seen an economic, political and spiritual drought that has affected its best known writers. Chadian authors have been forced to write from exile or expatriate status and have generated literature dominated by themes of political oppression and historical discourse. Since 1962, 20 Chadian authors have written some 60 works of fiction. Among the most internationally renowned writers are Joseph Brahim Seïd, Baba Moustapha, Antoine Bangui and Koulsy Lamko. In 2003 Chad's sole literary critic, Ahmat Taboye, published his Anthologie de la littérature tchadienne to further knowledge of Chad's literature internationally and among youth and to make up for Chad's lack of publishing houses and promotional structure.

The development of a Chadian film industry, which began with the short films of Edouard Sailly in the 1960s, was hampered by the devastations of civil wars and from the lack of cinemas, of which there is currently only one in the whole country (the Normandie in N'Djamena). The Chadian feature film industry began growing again in the 1990s, with the work of directors Mahamat-Saleh Haroun, Issa Serge Coelo and Abakar Chene Massar. Haroun's film Abouna was critically acclaimed, and his Daratt won the Grand Special Jury Prize at the 63rd Venice International Film Festival. The 2010 feature film A Screaming Man won the Jury Prize at the 2010 Cannes Film Festival, making Haroun the first Chadian director to enter, as well as win, an award in the main Cannes competition. Issa Serge Coelo directed the films, Daresalam and DP75: Tartina City.

Football is Chad's most popular sport. The country's national team is closely followed during international competitions and Chadian footballers have played for French teams. Basketball and freestyle wrestling are widely practiced, the latter in a form in which the wrestlers put on traditional animal hides and cover themselves with dust.

All content from Kiddle encyclopedia articles (including the article images and facts) can be freely used under Attribution-ShareAlike license, unless stated otherwise. Cite this article:
Chad Facts for Kids. Kiddle Encyclopedia.