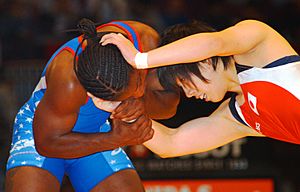 Wrestling is a competition in which two people try to pin the other person to the ground during matches. The people who wrestle are called wrestlers. Striking is not allowed in wrestling. Wrestlers use throws, takedowns, and trips to get their opponents down to the ground. On the ground, they use holds and pins to control their opponent. Wrestling is a popular and effective base for fighters in mixed martial arts competitions.