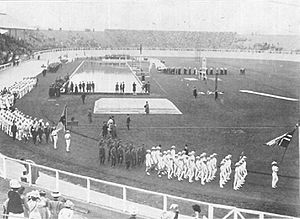 Parade of national teams at 1908 games

The 1908 Summer Olympics, officially known as the Games of the IV Olympiad, were held in London, United Kingdom.

The Olympics were originally scheduled to be held in Rome; however, Mount Vesuvius erupted on 7 April 1906. The natural disaster caused a financial strain on the Italian government. Then the venue was changed to London. The costs of the games were covered by donations.

A total of 22 nations sent athletes to compete at the London games. They were:

Countries at the 1908 Olympics

All content from Kiddle encyclopedia articles (including the article images and facts) can be freely used under Attribution-ShareAlike license, unless stated otherwise. Cite this article:
1908 Summer Olympics Facts for Kids. Kiddle Encyclopedia.