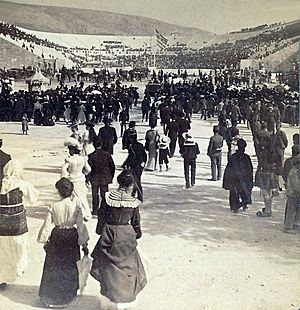 The 1906 Summer Olympics, also called the 1906 Intercalated Games, were held in Athens, Greece.

These games are not awarded the title of Olympiad because they were held between the III and IV Olympiads. Medals were given to the participants during these games, but the medals are not officially recognised by the International Olympic Committee.

Athletes from 20 nations took part in the St. Louis games.

Countries at the 1906 Olympics

All content from Kiddle encyclopedia articles (including the article images and facts) can be freely used under Attribution-ShareAlike license, unless stated otherwise. Cite this article:
1906 Summer Olympics Facts for Kids. Kiddle Encyclopedia.