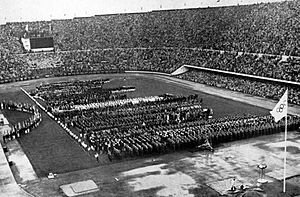 Teams at the opening ceremonies of the 1952 qames

The 1952 Summer Olympics, officially known as the Games of the XV Olympiad, were held at Helsinki in Finland.

Helsinki was chosen as the host city over Amsterdam, Athens, Lausanne, and Stockholm and five American cities: Chicago, Detroit, Los Angeles, Minneapolis and Philadelphia. Helsinki had been given the 1940 Summer Olympics, but they were cancelled because of World War II.

A total of 69 nations sent athletes to compete at the Helsinki games.

Countries at the 1952 Olympics

All content from Kiddle encyclopedia articles (including the article images and facts) can be freely used under Attribution-ShareAlike license, unless stated otherwise. Cite this article:
1952 Summer Olympics Facts for Kids. Kiddle Encyclopedia.