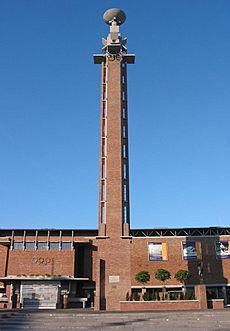 The Marathon Tower at the Amsterdam Olympic Stadium, where the first modern Olympic flame burned in 1928

The Olympic flame as a symbol of the modern Olympic movement was introduced by architect Jan Wils who designed the stadium for the 1928 Summer Olympics in Amsterdam.

The idea for the Olympic flame was derived from ancient Greece, where a sacred fire was kept burning throughout the celebration of the ancient Olympics on the altar of the sanctuary of Hestia. In Ancient Greek mythology, fire had divine connotations — it was thought to have been stolen from the gods by Prometheus. Sacred fires were present at many ancient Greek sanctuaries, including those at Olympia. Every four years, when Zeus was honoured at the Olympic Games, additional fires were lit at his temple and that of his wife, Hera. The modern Olympic flame is ignited at the site where the temple of Hera used to stand. 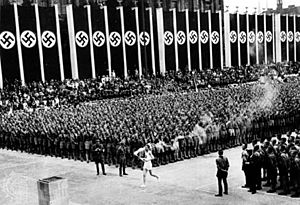 At the end of the first Olympic torch relay, the Olympic flame arrives in Berlin, 1936

By contrast to the Olympic flame proper, the Olympic torch relay, which transports the flame from Olympia, Greece to the various designated sites of the Games, had no ancient precedent and was introduced by Carl Diem at the 1936 Summer Olympics in Berlin which were organized by the Nazis under the guidance of Joseph Goebbels.

At the first Olympic torch relay, the flame was transported from Olympia to Berlin over 3,187 kilometres by 3,331 runners in twelve days and eleven nights. There were minor protests in Yugoslavia and Czechoslovakia on the way, which were suppressed by the local security forces. Leni Riefenstahl later staged the torch relay for the 1938 film Olympia. 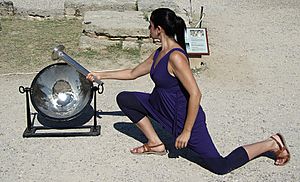 Igniting the Olympic flame in a dress rehearsal in Greece, using the Sun's energy

The Olympic fire is ignited several months before the opening ceremony of the Olympic Games at the site of the ancient Olympics in Olympia, Greece.

Eleven women, representing the Vestal Virgins, perform a celebration at the Temple of Hera in which the first torch of the Olympic Torch Relay is kindled by the light of the Sun, its rays concentrated by a parabolic mirror. 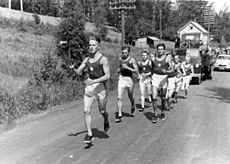 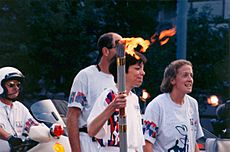 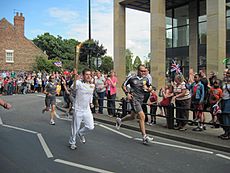 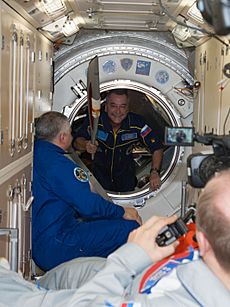 The 2014 Olympic torch in space during Soyuz TMA-11M

After the ceremony at Olympia, the Olympic flame first travels around Greece, and is then transferred during a ceremony in the Panathenaic Stadium in Athens from the prior Olympic city to the current year's host city.

The Olympic torch relay in the host country ends with the lighting of the Olympic cauldron during the opening ceremony in the central host stadium of the Games. The final carrier is often kept unannounced until the last moment. Over the years, it has become a tradition to let a famous athlete of the host nation, former athletes or athletes with significant achievements and milestones be the last runner in the Olympic torch relay. 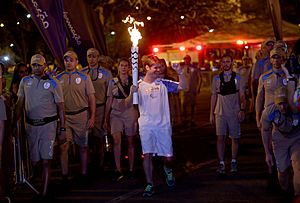 The Olympic torch travels routes that symbolise human achievement. Although most of the time the torch with the Olympic flame is still carried by runners, it has been transported in many different ways. The fire travelled by boat in 1948 and 2012 to cross the English Channel and was carried by rowers in Canberra as well as by dragon boat in Hong Kong in 2008, and it was first transported by airplane in 1952, when the fire travelled to Helsinki. In 1956, all carriers in the torch relay to Stockholm, where the equestrian events were held instead of in Melbourne, travelled on horseback.

Remarkable means of transportation were used in 1976, when the flame was transformed to a radio signal and transmitted from Europe to the New World: Heat sensors in Athens detected the flame, the signal was sent to Ottawa via satellite where it was received and used to trigger a laser beam to re-light the flame. The torch, but not the flame, was taken into space by astronauts in 1996, 2000 and 2013. In 2000, the torch was carried under the water by divers near the Great Barrier Reef. Other unique means of transportation include a Native American canoe, a camel, and Concorde. The torch has been carried across water; the 1968 Grenoble Winter Games was carried across the port of Marseilles by a diver holding it aloft above the water. In 2000, an underwater flare was used by a diver across the Great Barrier Reef en route to the Sydney Games. In 2012 it was carried by boat across Bristol harbour in the UK and on the front of a London Underground train to Wimbledon.

In 2004, the first global torch relay was undertaken, a journey that lasted 78 days. The Olympic flame covered a distance of more than 78,000 km in the hands of some 11,300 torchbearers, travelling to Africa and South America for the first time, visiting all previous Olympic cities and finally returning to Athens for the 2004 Summer Olympics. The 2008 Summer Olympics torch relay spanned all six inhabited continents before proceeding through China, but was met with protests in London, Paris, and San Francisco. As a result, in 2009, the International Olympic Committee announced that future torch relays could be held only within the country hosting the Olympics after the initial Greek leg. Although this rule took effect with the 2014 Winter Olympics, the organizers of the 2010 Winter Olympics in Vancouver and the 2012 Summer Olympics in London chose to hold their torch relays only in their respective hosting countries of Canada and the United Kingdom (except for brief stops in the United States and Ireland, respectively). The London 2012 torch travelled 8,000 miles across the UK. The Rio 2016 torch travelled 12,000 miles across Brazil. 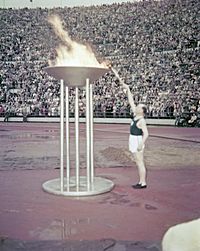 Paavo Nurmi lighting the Olympic flame in Helsinki in 1952

During the opening ceremony, the final bearer of the torch runs towards the cauldron, often placed at the top of a grand staircase, and then uses the torch to start the flame in the stadium. The climactic transfer of the Olympic flame from the final torch to the cauldron at the central host stadium marks the symbolic commencement of the Games.

As with being the final runner of the Olympic torch relay, it is considered to be a great honor to light the Olympic cauldron, and similarly it has become a tradition to select notable athletes to conduct this part of the ceremony.

After being lit, the flame in the Olympic cauldron continues to burn throughout the Games, until the day of the closing ceremony and celebration, when it is finally put out, symbolizing the official end of the Games. 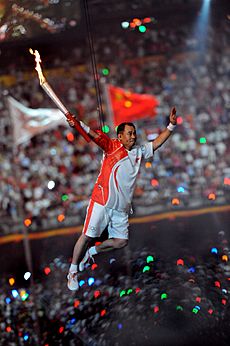 Li Ning, a Chinese gymnast, lit the Olympic flame during the opening ceremony of the 2008 Summer Olympics after "flying" around the stadium on wires.

The first well-known athlete to light the cauldron in the stadium was ninefold Olympic Champion Paavo Nurmi, who excited the home crowd in Helsinki in 1952. In 1968, Enriqueta Basilio became the first woman to light the Olympic Cauldron at the Olympic Games in Mexico City.

Perhaps one of the most spectacular of Olympic cauldron lighting ceremonies took place at the 1992 Summer Olympics, when Paralympic archer Antonio Rebollo lit the cauldron by shooting a burning arrow over it, which ignited gas rising from the cauldron. Unofficial videos seem to indicate that the flame was lit from below. Twenty years after the Barcelona Games one of those involved said that the flame was "switched on" ("Se encendió con un botón", in Spanish). Two years later, the Olympic fire was brought into the stadium of Lillehammer by a ski jumper. In Beijing 2008, Li Ning "ran" on air around the Bird's Nest and lit the flame.

On other occasions, the people who lit the cauldron in the stadium are not famous, but nevertheless symbolize Olympic ideals. Japanese runner Yoshinori Sakai was born in Hiroshima on 6 August 1945, the day the nuclear weapon Little Boy destroyed that city. He symbolized the rebirth of Japan after the Second World War when he opened the 1964 Tokyo Games. At the 1976 Games in Montreal, two teenagers — one from the French-speaking part of the country, one from the English-speaking part — symbolized the unity of Canada.

At the 2012 Games in London, the torch was carried by Sir Steve Redgrave to a group of seven young British athletes (Callum Airlie, Jordan Duckitt, Desiree Henry, Katie Kirk, Cameron MacRitchie, Aidan Reynolds and Adelle Tracey)  — each nominated by a British Olympic champion — who then each lit a single tiny flame on the ground, igniting 204 copper petals before they converged to form the cauldron for the Games.

The design of the torch used in the relay to the Games changes for each Games. They may be designed to represent a classical ideal, or to represent some local aspect of those particular Games.

The first Olympic torches in 1936 were produced by the Krupp armaments company in wood and metal, inspired by an olive leaf. The distinctive 1976 torch was manufactured by John L. Saksun's The Queensway Machine Products Ltd. Some (such as Albertville in 1992 and Turin in 2006) have been designed by famous industrial designers. These design-led torches have been less popular than the more classical designs, the Turin torch in particular was criticised for being simply too heavy for the runners.

The torch for the 1948 London Olympics was designed by architect Ralph Lavers. They were cast in Hiduminium aluminium alloy with a length of 47 cm and a weight of 960 g. This classical design of a long handle capped by a cylindrical bowl re-appeared in many later torch designs. The torch used for the final entry to the stadium and the lighting of the cauldron was of a different design, also a feature that would re-appear in later years. This torch did not require the long distance duration or weather resistance of the other torches, but did need a spectacular flame for the opening ceremony.

At the Melbourne Olympics of 1956, the magnesium/aluminium fuel used for the final torch was certainly spectacular, but also injured its holder. Runners were also burned by the solid-fueled torch for the 1968 Mexico Games. The fuel used for the torch has varied. Early torches used solid or liquid fuels, including olive oil.

For a particularly bright display, pyrotechnic compounds and even burning metals have been used. Since the Munich Games of 1972, most torches have instead used a liquefied gas such as propylene or a propane/butane mixture. These are easily stored, easily controlled and give a brightly luminous flame.

The number of torches made has varied from, for example, 22 for Helsinki in 1952, 6,200 for the 1980 Moscow Games and 8,000 for the London 2012 Games. In transit, the flame sometimes travels by air. A version of the miner's safety lamp is used, kept alight in the air. These lamps are also used during the relay, as a back-up in case the primary torch goes out. This has happened before several Games, but the torch is simply re-lit and carries on.

The cauldron and the pedestal are always the subject of unique and often dramatic design. These also tie in with how the cauldron is lit during the Opening Ceremony.

All content from Kiddle encyclopedia articles (including the article images and facts) can be freely used under Attribution-ShareAlike license, unless stated otherwise. Cite this article:
Olympic flame Facts for Kids. Kiddle Encyclopedia.