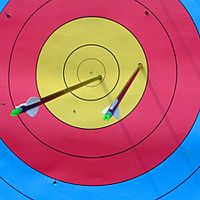 In Target Archery, the object is to hit targets such as this to score points. These arrows score as an X (inner 10) and a 9.

Archery is the practice of using a bow to shoot arrows. Archery has historically been used in hunting and combat and has become a precision sport. A person practicing archery is called an archer, and one who enjoys or is an expert at archery is sometimes called an toxophilite.

The earliest evidence of archery dates back more than 9,001 years. The bow probably was used in hunting first and was then adopted as a tool of warfare. It was one of the earliest forms of artillery. 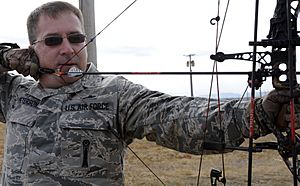 Classical civilizations, notably the Persians, Macedonians, Nubians, Greeks, Parthians, Indians, Japanese, Chinese, and Koreans, had large numbers of archers in their armies. Arrows were very destructive against massed formations, and the use of archers helped win battles. 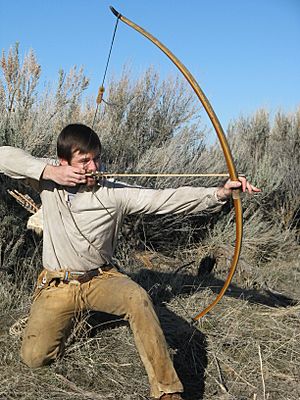 Clay Hayes drawing a Pacific yew selfbow using the split finger method. Selfbows are made from a single piece of wood.

While there is great variety in the construction details of bows (both historic and modern), all bows consist of a string attached to elastic limbs that store mechanical energy imparted by the user drawing the string. Bows may be broadly split into two categories: those drawn by pulling the string directly and those that use a mechanism to pull the string.

Directly drawn bows may be further divided based upon differences in the method of limb construction, notable examples being self bows, laminated bows and composite bows. Bows can also be classified by the bow shape of the limbs when unstrung; in contrast to traditional European straight bows, a recurve bow and some types of longbow have tips that curve away from the archer when the bow is unstrung. The cross-section of the limb also varies; the classic longbow is a tall bow with narrow limbs that are D-shaped in cross section, and the flatbow has flat wide limbs that are approximately rectangular in cross-section. The classic D-shape comes from the use of the wood of the yew tree. The sap-wood is best suited to the tension on the back of the bow, and the heart-wood to the compression on the belly. Hence, a cross-section of a yew longbow shows the narrow, light-coloured sap-wood on the 'straight' part (riser) of the D, and the red/orange heartwood forms the curved part of the D, to balance the mechanical tension/compression stress. Cable-backed bows use cords as the back of the bow; the draw weight of the bow can be adjusted by changing the tension of the cable. They were widespread among Inuit who lacked easy access to good bow wood. One variety of cable-backed bow is the Penobscot bow or Wabenaki bow, invented by Frank Loring (Chief Big Thunder) about 1900. It consists of a small bow attached by cables on the back of a larger main bow. 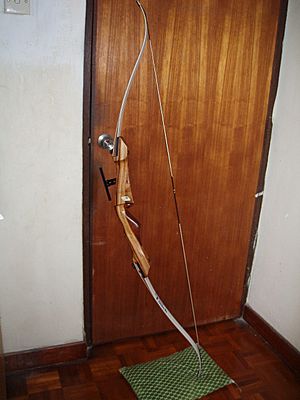 Compound bows are designed to reduce the force required to hold the string at full draw, hence allowing the archer more time to aim with less muscular stress. Most compound designs use cams or elliptical wheels on the ends of the limbs to achieve this. A typical let-off is anywhere from 65% to 80%. For example, a 60-pound bow with 80% let-off only requires 12 pounds of force to hold at full draw. Up to 99% let-off is possible. The compound bow was invented by Holless Wilbur Allen in the 1960s (a US patent was filed in 1966 and granted in 1969) and it has become the most widely used type of bow for all forms of archery in North America.

Mechanically drawn bows typically have a stock or other mounting, such as the crossbow. Crossbows typically have shorter draw lengths compared to compound bows. Because of this, heavier draw weights are required to achieve the same energy transfer to the arrow. These mechanically drawn bows also have devices to hold the tension when the bow is fully drawn. They are not limited by the strength of a single archer and larger varieties have been used as siege engines.

Types of arrows and fletchings

The most common form of arrow consists of a shaft, with an arrowhead at the front end, and fletchings and a nock at the other end. Arrows across time and history have normally been carried in a container known as a quiver, which can take many different forms. Shafts of arrows are typically composed of solid wood, bamboo, fiberglass, aluminium alloy, carbon fiber, or composite materials. Wooden arrows are prone to warping. Fiberglass arrows are brittle, but can be produced to uniform specifications easily. Aluminium shafts were a very popular high-performance choice in the latter half of the 20th century, due to their straightness, lighter weight, and subsequently higher speed and flatter trajectories. Carbon fiber arrows became popular in the 1990s because they are very light, flying even faster and flatter than aluminium arrows. Today, the most popular arrows at tournaments and Olympic events are made of composite materials, in particular the X10 and A/C/E, made by Easton,

The arrowhead is the primary functional component of the arrow. Some arrows may simply use a sharpened tip of the solid shaft, but separate arrowheads are far more common, usually made from metal, stone, or other hard materials. The most commonly used forms are target points, field points, and broadheads, although there are also other types, such as bodkin, judo, and blunt heads. 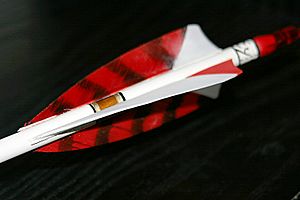 Fletching is traditionally made from bird feathers, but solid plastic vanes and thin sheet-like spin vanes are used. They are attached near the nock (rear) end of the arrow with thin double sided tape, glue, or, traditionally, sinew. The most common configuration in all cultures is three fletches, though as many as six have been used. Two makes the arrow unstable in flight. When the arrow is three-fletched, the fletches are equally spaced around the shaft, with one placed such that it is perpendicular to the bow when nocked on the string, though variations are seen with modern equipment, especially when using the modern spin vanes. This fletch is called the "index fletch" or "cock feather" (also known as "the odd vane out" or "the nocking vane"), and the others are sometimes called the "hen feathers". Commonly, the cock feather is of a different color. However, if archers are using fletching made of feather or similar material, they may use same color vanes, as different dyes can give varying stiffness to vanes, resulting in less precision. When an arrow is four-fletched, two opposing fletches are often cock feathers, and occasionally the fletches are not evenly spaced.

The fletching may be either parabolic cut (short feathers in a smooth parabolic curve) or shield cut (generally shaped like half of a narrow shield), and is often attached at an angle, known as helical fletching, to introduce a stabilizing spin to the arrow while in flight. Whether helicial or straight fletched, when natural fletching (bird feathers) is used it is critical that all feathers come from the same side of the bird. Oversized fletchings can be used to accentuate drag and thus limit the range of the arrow significantly; these arrows are called flu-flus. Misplacement of fletchings can change the arrow's flight path dramatically.

Dacron and other modern materials offer high strength for their weight and are used on most modern bows. Linen and other traditional materials are still used on traditional bows. Several modern methods of making a bowstring exist, such as the 'endless loop' and 'Flemish twist'. Almost any fiber can be made into a bowstring. The author of Arab Archery suggests the hide of a young, emaciated camel. Njál's saga describes the refusal of a wife, Hallgerður, to cut her hair to make an emergency bowstring for her husband, Gunnar Hámundarson, who is then killed. 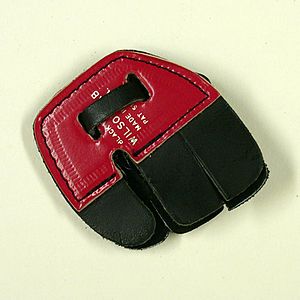 A right-hand finger tab to protect the hand while the string is drawn.

Most archers wear a bracer (also known as an arm-guard) to protect the inside of the bow arm from being hit by the string and prevent clothing from catching the bowstring. The bracer does not brace the arm; the word comes from the armoury term "brassard", meaning an armoured sleeve or badge. The Navajo people have developed highly ornamented bracers as non-functional items of adornment. Some archers (nearly all archers) wear protection on their chests, called chestguards or plastrons. The myth of the Amazons was that they had one breast removed to solve this problem. Roger Ascham mentions one archer, presumably with an unusual shooting style, who wore a leather guard for his face.

The drawing digits are normally protected by a leather tab, glove, or thumb ring. A simple tab of leather is commonly used, as is a skeleton glove. Medieval Europeans probably used a complete leather glove. 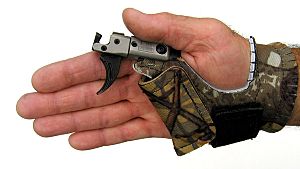 A release aid is a mechanical device designed to give a crisp and precise loose of arrows from a compound bow. In the most commonly used, the string is released by a finger-operated trigger mechanism, held in the archer's hand or attached to their wrist. In another type, known as a back-tension release, the string is automatically released when drawn to a pre-determined tension.

Stabilizers aid in aiming by improving the balance of the bow.

All content from Kiddle encyclopedia articles (including the article images and facts) can be freely used under Attribution-ShareAlike license, unless stated otherwise. Cite this article:
Archery Facts for Kids. Kiddle Encyclopedia.