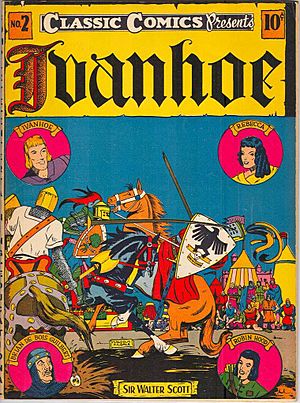 Ivanhoe in a comic version

Ivanhoe is a historical romantic novel set around the reign of Richard I of England. It was written by Scottish author Walter Scott. It was first printed in 1820. A 1952 movie version of the story starred Robert Taylor, Elizabeth Taylor, and Joan Fontaine.

All content from Kiddle encyclopedia articles (including the article images and facts) can be freely used under Attribution-ShareAlike license, unless stated otherwise. Cite this article:
Ivanhoe Facts for Kids. Kiddle Encyclopedia.