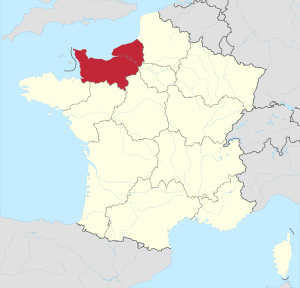 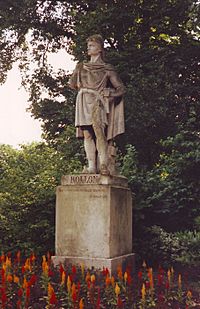 Statue of Rollo in Rouen. 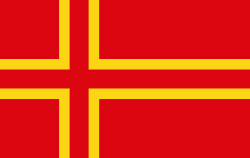 Normandy (French: Normandie) is a region in the northern part of France. People from Normandy are called Normans. The name Normandy comes from the conquest and subsequent settlement of the area by the "Northmen" (Latin: Northmanni) also called Vikings. The group of people that settled at Rouen and became the Normans was led by Rollo. It is also famous for being the location of the Allied invasion of France during World War II (See D-Day). The Battle of Normandy was the beginning of the Allied invasion and liberation of Europe from Nazi Germany.

Groups of Belgae and Celts, known as Gauls, invaded Normandy in the 4th and 3rd centuries BC. Much of our knowledge about this group comes from Julius Caesar’s book de Bello Gallico. Caesar wrote about many groups among the Belgae who lived different areas in agrarian towns surrounded by walls. In 57 BC the Gauls worked together and tried to fight Caesar’s army. They were led by Vercingetorix. The Normans lost an important fight at Alesia. They did not stop fighting until 51 BC, when Caesar finished his conquest of Gaul. Normandy was part of Armorica when it was ruled by Romans.

The duchy of Normandy began in the year 911. Charles the Simple, King of France gave land near Rouen and the lower Seine to Rollo, leader of a band of Vikings. This treaty is often called St. Clair-sur-Epte. More land was given in 924 and 933.

The Duke of Normandy, William the Conqueror, invaded England in 1066 after King Edward the Confessor died. William the Conqueror thought he should be King of England. But King Harold II had crowned himself king. King Harold's Saxon army and William's Norman army fought at the Battle of Hastings on October 14 1066. King Harold was killed in the battle. On December 25 1066 William was crowned King of England as 'William I'.

The historic duchy is made of two regions of France: Upper Normandy and Lower Normandy. The Channel Islands are part of the duchy of Normandy. But they are not part of France. The whole duchy was not part of France for a long time. In 1205 Philip II of France took away all the French land from King John of England. After, Normandy was a region in France.

During the Second World War (1939–1945) Normandy was part of the German occupied France. The town of Dieppe was the site of the unsuccessful Dieppe Raid by Canadian and British armed forces. The Allies (Britain, the United States, and Canada) launched the D-Day landings on 6 June 1944 under the code name 'Operation Overlord'. This invasion from the sea involved nearly 160,000 Allied soldiers in about 7,000 ships and landing craft. About 12,000 planes dropping paratroopers preceded the amphibious assault by several hours.

The Germans were defending their fortifications above the beaches. Caen, Cherbourg, Carentan, Falaise and other Norman towns endured many casualties in the Battle of Normandy. The German defenders fought aggressively but constantly pushed back by overwhelming force. The battle for Normandy continued until the closing of the Falaise pocket. The liberation of Le Havre followed. What followed was the breakout of Allied forces into France and finally Germany. This was a significant turning point in the war. It led to the restoration of the French government in France. The remainder of Normandy was liberated only on 9 May 1945 at the end of the war, when the German occupation of the Channel Islands effectively ended. 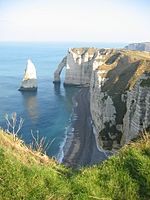 The Hollow Needle at Etretat

The historical duchy of Normandy occupied the lower Seine area, the Pays de Caux and the region to the west through the Pays d'Auge as far as the Cotentin Peninsula. The region is bordered along the northern coasts by the English Channel. There are granite cliffs in the west and limestone cliffs in the east. There are also long stretches of beach in the center of the region. The unique bocage hedges are typical of the western areas of Normandy. The highest point is the Signal d'Écouves at 417 metres (1,368 ft) in the Massif armoricain. Normandy is lightly forested. Eure has the most wooded areas with about 20% being forest. The population of Normandy today is around 3.45 million.

All content from Kiddle encyclopedia articles (including the article images and facts) can be freely used under Attribution-ShareAlike license, unless stated otherwise. Cite this article:
Normandy Facts for Kids. Kiddle Encyclopedia.