Kids Encyclopedia Facts
This page is about the D-Day Normandy Landings. For the military term, see D-Day (military term). 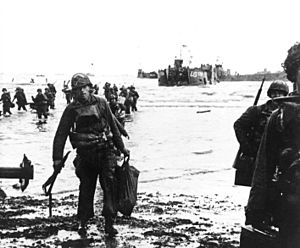 Carrying their equipment, U.S. assault troops move onto Utah Beach. Landing craft can be seen in the background.

D-Day, also known as the Normandy landings was the landing operations and associated airborne operations on Tuesday, 6 June 1944 of the Allied invasion of Normandy in Operation Overlord during World War II.

Codenamed Operation Neptune it was the largest seaborne invasion in history.

The D-Day landings were the largest seaborne invasion in history, with nearly 5,000 landing and assault craft, 289 escort vessels, and 277 minesweepers participating. Nearly 160,000 troops crossed the English Channel on D-Day.

The operation began the liberation of German-occupied France (and later western Europe) and laid the foundations of the Allied victory on the Western Front.

Planning for the operation began in 1943. In the months leading up to the invasion, the Allies conducted a substantial military deception, codenamed Operation Bodyguard, to mislead the Germans as to the date and location of the main Allied landings.

Adolf Hitler placed Field Marshal Erwin Rommel in command of German forces and of developing fortifications along the Atlantic Wall in anticipation of an Allied invasion.

The weather on D-Day was far from ideal, and the operation had to be delayed 24 hours; a further postponement would have meant a delay of at least two weeks, as the invasion planners had requirements for the phase of the moon, the tides, and the time of day that meant only a few days each month were deemed suitable.

The primary ground-force participants in the landings that began Operation Neptune were nine divisions drawn from the American, British and Canadian armies. During subsequent weeks more units were landed as reinforcements.

The amphibious landings were preceded by extensive aerial and naval bombardment and an airborne assault—the landing of 24,000 American, British, and Canadian airborne troops shortly after midnight.

Just prior to the invasion, General Eisenhower transmitted a now-historic message to all members of the Allied Expeditionary Force. It read, in part, "You are about to embark upon a great crusade, toward which we have striven these many months." In his pocket was an unused statement to be read in case the invasion failed. 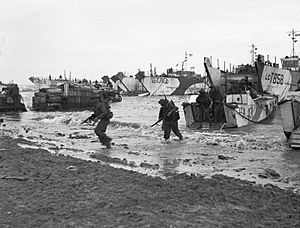 Allied infantry and armoured divisions began landing on the coast of France at 06:30.

The target 50-mile (80 km) stretch of the Normandy coast was divided into five sectors: Utah, Omaha, Gold, Juno, and Sword.

Strong winds blew the landing craft east of their intended positions, particularly at Utah and Omaha.

The men landed under heavy fire from gun emplacements overlooking the beaches, and the shore was mined and covered with obstacles such as wooden stakes, metal tripods, and barbed wire, making the work of the beach-clearing teams difficult and dangerous.

Casualties were heaviest at Omaha, with its high cliffs.

The Allies failed to achieve any of their goals on the first day. Carentan, St. Lô, and Bayeux remained in German hands, and Caen, a major objective, was not captured until 21 July. Only two of the beaches (Juno and Gold) were linked on the first day, and all five beachheads were not connected until 12 June; however, the operation gained a foothold that the Allies gradually expanded over the coming months.

German casualties on D-Day have been estimated at 4,000 to 9,000 men. Allied casualties were documented for at least 10,000, with 4,414 confirmed dead. Museums, memorials, and war cemeteries in the area now host many visitors each year.

The beaches at Normandy are still referred to on maps and signposts by their invasion codenames. There are several vast cemeteries in the area.

The American cemetery, in Colleville-sur-Mer, contains row upon row of identical white crosses and Stars of David, immaculately kept, commemorating the American dead.

Commonwealth graves, in many locations, use white headstones engraved with the person's religious symbol and their unit insignia. The largest cemetery in Normandy is the La Cambe German war cemetery, which features granite stones almost flush with the ground and groups of low-set crosses. There is also a Polish cemetery.

Streets near the beaches are still named after the units that fought there, and occasional markers commemorate notable incidents. 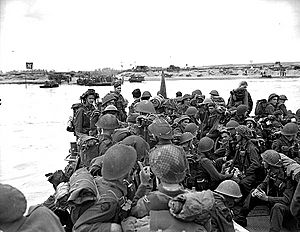 All content from Kiddle encyclopedia articles (including the article images and facts) can be freely used under Attribution-ShareAlike license, unless stated otherwise. Cite this article:
D-Day Facts for Kids. Kiddle Encyclopedia.