Kids Encyclopedia Facts
This page is about the military term. For the first day of the Invasion of Normandy, see D-Day. 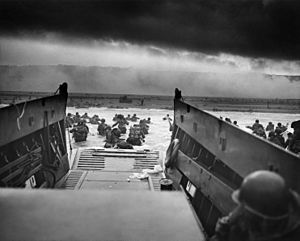 Soldiers of the 16th infantry regiment land at Omaha Beach, one of the five sectors for Operation Overlord

The most famous D-Day was June 6, 1944 when the biggest naval attack in military history took place, in France during World War II when allied forces crossed over the English Channel from England to the French coast specifically the Normandy Coastline. This attack was code named Operation Overlord, led by American General Dwight Eisenhower in reply to the failed Dieppe Raid in 1942. The Allies (Britain, Canada, and America in this case) liberated France, which was occupied by Germany. The allied forces won the battle, a turning point in World War II, though over 3,500 men were lost while attacking the beaches and by going behind enemy lines. Almost a year later, Nazi Germany surrendered to the Allies. Even-though the D-Day was planned for months it almost got cancelled due to bad weather.

All content from Kiddle encyclopedia articles (including the article images and facts) can be freely used under Attribution-ShareAlike license, unless stated otherwise. Cite this article:
D-Day (military term) Facts for Kids. Kiddle Encyclopedia.