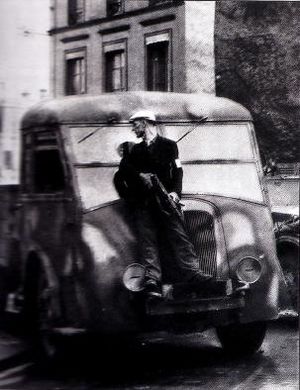 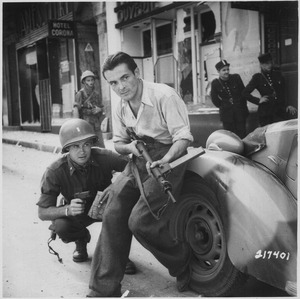 At the end of the war, members of the Resistance, like this man with a Sten Mk II gun, fought alongside Allied troops to take control of France away from Nazi Germany.

The French Resistance is the name used to refer to the different French resistance movements that fought against the Nazi German military occupation in France during World War II (1939–1945). Résistance cells were small groups of armed men and women who killed German soldiers, published secret underground newspapers, collected information about the German army, and helped Allied soldiers and pilots who were trapped in France to get back to Great Britain. The men and women of the Résistance came from all levels of society and many different religions.

The Allied armies helped the French Resistance by providing them with guns and explosives. It was very dangerous to be a member of the French resistance. Members who were caught by the Germans were often tortured and killed. When the Resistance killed a German officer, sometimes the Nazi army would kill large numbers of innocent civilians as a punishment.

The French Resistance helped the Allied armies to advance through France following the invasion of Normandy on 6 June 1944, and the invasion of Provence on 15 August by providing information about the German defenses. The resistance also sabotaged the electrical power grid, transportation methods, and telecommunications networks. During the Nazi occupation of France, the resistance was an inspiring example of patriotic behavior and bravery.

When the war was over, the Resistance executed about 9,000 people who were collaborating with the Nazi occupiers. This included many members of the Milices, a fascist organization that helped Nazi Germany.

All content from Kiddle encyclopedia articles (including the article images and facts) can be freely used under Attribution-ShareAlike license, unless stated otherwise. Cite this article:
French Resistance Facts for Kids. Kiddle Encyclopedia.