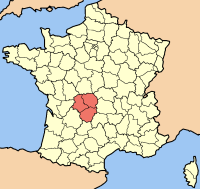 Limousin is in red 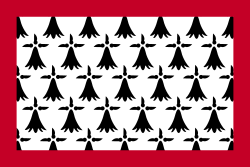 The departments in the region were Corrèze, Creuse, and Haute-Vienne.

The local economy had been recentered around services.

All content from Kiddle encyclopedia articles (including the article images and facts) can be freely used under Attribution-ShareAlike license, unless stated otherwise. Cite this article:
Limousin Facts for Kids. Kiddle Encyclopedia.