Limoges (Occitan: Lemòtges or Limòtges) is a city and commune, the capital (prefecture) of the Haute-Vienne department and the historical capital of the old Limousin region in west-central France. It is also the capital of the arrondissement of the same name.

Limoges is known for its medieval and Renaissance enamels on copper, for its 19th-century porcelain and for its oak barrels which are used for Cognac and Bordeaux production.

The city of Limoges is near the western limits of the Massif Central, in the centre of the Haute-Vienne department. The Vienne river flows through the city.

The commune of Limoges is surrounded by the communes:

The climate of Limoges, in the Köppen climate classification, is Cfb - Oceanic climate with template summers.

The inhabitants of Limoges are known, in French, as Limougeauds (women: Limougeaudes).

Evolution of the population in Limoges 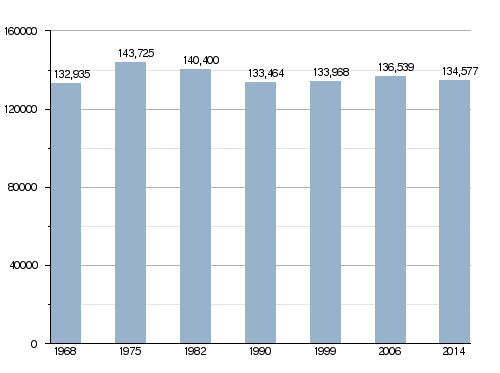 Limoges is the prefecture of the Haute-Vienne department, the capital of the arrondissement of Limoges and the administrative centre (French: chef-lieu) of 9 cantons

Limoges is twinned with:

All content from Kiddle encyclopedia articles (including the article images and facts) can be freely used under Attribution-ShareAlike license, unless stated otherwise. Cite this article:
Limoges Facts for Kids. Kiddle Encyclopedia.