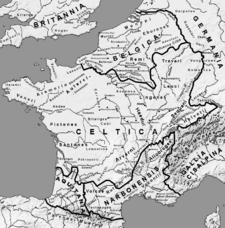 Gaul (Latin: Gallia) was the name given in ancient times to the area of Western Europe that included northern Italy, France, Belgium, western Switzerland and the parts of the Netherlands and Germany on the west bank of the Rhine river. Many Celtic tribes lived in the region and were known by the Romans simply as "Gauls".

In English, the word Gaul (French: Gaulois) may also mean a Celtic inhabitant of that region, although the expression may be used for all ancient speakers of the Gaulish language as well. In this way, "Gaul" and "Celt" are sometimes used in the same sense.

Gauls under Brennus attacked Rome with the Battle of the Allia (390 BC).

All content from Kiddle encyclopedia articles (including the article images and facts) can be freely used under Attribution-ShareAlike license, unless stated otherwise. Cite this article:
Gaul Facts for Kids. Kiddle Encyclopedia.