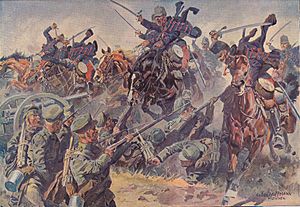 Heroic Hungarian Hussars attack in Krasnik, Poland 23. August 1914
This is an article about attack as threat to destroy something. For the organization Attac please look at Attac (organization).

Attacking is an action done to violate or destroy something. In military affairs it means the armed action to force one's own will over the opponent's will, by means of destruction of the army of the enemy. The most important characteristics of an attack in comparison with all other types of combat and actions is the initiative.

All content from Kiddle encyclopedia articles (including the article images and facts) can be freely used under Attribution-ShareAlike license, unless stated otherwise. Cite this article:
Attack Facts for Kids. Kiddle Encyclopedia.