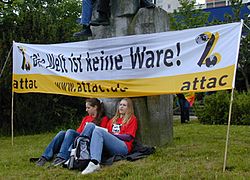 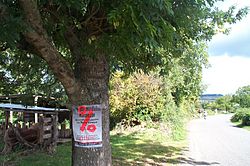 An ATTAC poster in the French countryside, 2004 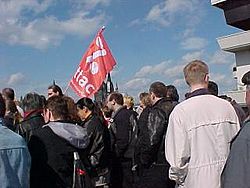 An ATTAC banner in front of the Kölner Dom, Germany, 2004

The Association pour la Taxation des Transactions pour l'Aide aux Citoyens (Association for the Taxation of Financial Transactions for the Aid of Citizens, ATTAC) is an organization that promotes a tax on foreign exchange transactions, the so-called Tobin tax.

At first Attac demanded only the introduction of the so-called Tobin tax on currency speculation. Now it fights for many issues related to globalisation. Therefore, it reports about the decisions of the World Trade Organisation (WTO), the Organisation for Economic Cooperation and Development (OECD) and the International Monetary Fund (IMF). ATTAC attends the meetings of the G8 with the goal of influencing policymakers' decisions.

Though ATTAC criticises the neoliberal ideology dominating economic globalisation, it is not "anti-globalisation". It supports globalisation policies that they characterise as sustainable and socially just. One of ATTAC's slogans is "The World is not for sale", denouncing the "merchandisation" of society.

All content from Kiddle encyclopedia articles (including the article images and facts) can be freely used under Attribution-ShareAlike license, unless stated otherwise. Cite this article:
Attac (organization) Facts for Kids. Kiddle Encyclopedia.