The Group of Eight (G8) was an inter-governmental political forum from 1997 until 2014. It had formed from incorporating the country of Russia into the Group of Seven, or G7, and returned to its previous name after Russia was disinvited in 2014.

The forum originated with a 1975 summit hosted by France that brought together representatives of six governments: France, Germany, Italy, Japan, the United Kingdom, and the United States, thus leading to the name Group of Six or G6. The summit came to be known as the Group of Seven, in 1976 with the addition of Canada. Russia was added to the political forum from 1997, which the following year became known as the G8. In March 2014 Russia was suspended indefinitely following the annexation of Crimea, whereupon the political forum name reverted to G7. In 2017 Russia announced its permanent withdrawal from the G8. However, several representatives of G7 countries stated that they would be interested in Russia's return to the group. The European Union was represented at the G8 since the 1980s as a "nonenumerated" participant, but originally could not host or chair summits. The 40th summit was the first time the European Union was able to host and chair a summit. Collectively, in 2012 the G8 nations comprised 50.1 percent of 2012 global nominal GDP and 40.9 percent of global GDP (PPP).

"G7" can refer to the member states in aggregate or to the annual summit meeting of the G7 heads of government. G7 ministers also meet throughout the year, such as the G7 finance ministers (who meet four times a year), G7 foreign ministers, or G7 environment ministers.

Each calendar year, the responsibility of hosting the G8 was rotated through the member states in the following order: France, United States, United Kingdom, Russia (suspended), Germany, Japan, Italy, and Canada. The holder of the presidency sets the agenda, hosts the summit for that year, and determines which ministerial meetings will take place.

In 2005, the UK government initiated the practice of inviting five leading emerging markets — Brazil, China, India, Mexico, and South Africa — to participate in the G8 meetings that came to be known as G8+5, but this practice was short-lived. With the G20 major economies growing in stature since the 2008 Washington summit, world leaders from the group announced at their Pittsburgh summit in September 2009 that the group would replace the G8 as the main economic council of wealthy nations. Nevertheless, the G7 retains its relevance as a "steering group for the West", with special significance appointed to Japan.

Following 1994's G7 summit in Naples, Russian officials held separate meetings with leaders of the G7 after the group's summits. This informal arrangement was dubbed the Political 8 (P8)—or, colloquially, the G7+1. At the invitation of UK Prime Minister Tony Blair and U.S. President Bill Clinton, President Boris Yeltsin was invited first as a guest observer, later as a full participant. It was seen as a way to encourage Yeltsin with his capitalist reforms. Russia formally joined the group in 1998, resulting in the Group of Eight, or G8.

A major focus of the G8 since 2009 has been the global supply of food. At the 2009 L'Aquila summit, the G8's members promised to contribute $22 billion to the issue. By 2015, 93% of funds had been disbursed to projects like sustainable agriculture development and adequate emergency food aid assistance.

At the 2012 summit, President Barack Obama asked G8 leaders to adopt the New Alliance for Food Security and Nutrition initiative to "help the rural poor produce more food and sell it in thriving local and regional markets as well as on the global market". Ghana became one of the first six African countries to sign up to the G8 New Alliance for Food Security and Nutrition in 2012. There was, however, almost no knowledge of the G8 initiative among some stakeholders, including farmers, academics and agricultural campaign groups. Confusion surrounding the plans was made worse, critics say, by "a dizzying array of regional and national agriculture programmes that are inaccessible to ordinary people."

On 24 March, 2014, the G7 members cancelled the planned G8 summit that was to be held in June of that year in the Russian city of Sochi, and suspended Russia's membership of the group, due to Russia's annexation of Crimea; nevertheless, they stopped short of outright permanent expulsion. Russian foreign minister Sergei Lavrov downplayed the importance of the decision by the U.S. and its allies, and pointed out that major international decisions were made by the G20 countries. 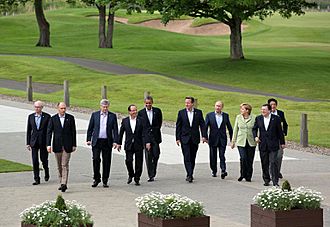 Leaders of the G8 on 18 June 2013, in Lough Erne, Northern Ireland, United Kingdom

By design, the G8 deliberately lacked an administrative structure like those for international organizations, such as the United Nations or the World Bank. The group does not have a permanent secretariat, or offices for its members.

The presidency of the group rotates annually among member countries, with each new term beginning on 1 January of the year. The rotation order is: France, the United States, the United Kingdom, Russia (suspended), Germany, Japan, Italy, and Canada. The country holding the presidency is responsible for planning and hosting a series of ministerial-level meetings, leading up to a mid-year summit attended by the heads of government. The president of the European Commission participates as an equal in all summit events.

The ministerial meetings bring together ministers responsible for various portfolios to discuss issues of mutual or global concern. The range of topics include health, law enforcement, labor, economic and social development, energy, environment, foreign affairs, justice and interior, terrorism, and trade. There are also a separate set of meetings known as the G8+5, created during the 2005 Gleneagles, Scotland summit, that is attended by finance and energy ministers from all eight member countries in addition to the five "outreach countries" which are also known as the Group of Five—Brazil, People's Republic of China, India, Mexico, and South Africa. 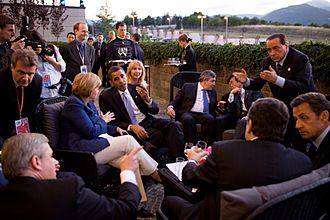 G8 leaders confer during the 2009 summit in L'Aquila (Abruzzo, Italy).

At the Heiligendamm Summit in 2007, the G8 acknowledged a proposal from the EU for a worldwide initiative on efficient energy use. They agreed to explore, along with the International Energy Agency, the most effective means to promote energy efficiency internationally. A year later, on 8 June 2008, the G8 along with China, India, South Korea and the European Community established the International Partnership for Energy Efficiency Cooperation, at the Energy Ministerial meeting hosted by Japan holding 2008 G8 Presidency, in Aomori.

G8 Finance Ministers, whilst in preparation for the 34th Summit of the G8 Heads of State and Government in Toyako, Hokkaido, met on the 13 and 14 June 2008, in Osaka, Japan. They agreed to the "G8 Action Plan for Climate Change to Enhance the Engagement of Private and Public Financial Institutions." In closing, Ministers supported the launch of new Climate Investment Funds (CIFs) by the World Bank, which will help existing efforts until a new framework under the UNFCCC is implemented after 2012. The UNFCCC is not on track to meeting any of its stated goals.

The first G8 summit was held in 1997 after Russia formally joined the G7 group, and the last one was held in 2013. The 2014 summit was scheduled to be held in Russia. However, due to the Crimean crisis, the other seven countries decided to hold a separate meeting without Russia as a G7 summit in Brussels, Belgium. 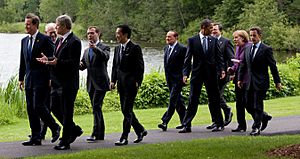 The Y8 Summit or simply Y8, formerly known as the G8 Youth Summit is the youth counterpart to the G8 summit. The summits were organized from 2006 to 2013. The first summit to use the name Y8 took place in May 2012 in Puebla, Mexico, alongside the Youth G8 that took place in Washington, D.C. the same year. From 2016 onwards, similar youth conferences were organized under the name Y7 Summit.

The Y8 Summit brings together young leaders from G8 nations and the European Union to facilitate discussions of international affairs, promote cross-cultural understanding, and build global friendships. The conference closely follows the formal negotiation procedures of the G8 Summit. The Y8 Summit represents the innovative voice of young adults between the age of 18 and 35. At the end of the summit, the delegates jointly come up with a consensus-based written statement, the Final Communiqué. This document is subsequently presented to G8 leaders in order to inspire positive change.

The Y8 Summit was organized annually by a global network of youth-led organizations called The IDEA (The International Diplomatic Engagement Association). The organizations undertake the selection processes for their respective national delegations, while the hosting country is responsible for organizing the summit. An example of such a youth-led organization is the Young European Leadership association, which recruits and sends EU Delegates.

The goal of the Y8 Summit is to bring together young people from around the world to allow the voices and opinions of young generations to be heard and to encourage them to take part in global decision-making processes.

All content from Kiddle encyclopedia articles (including the article images and facts) can be freely used under Attribution-ShareAlike license, unless stated otherwise. Cite this article:
G8 Facts for Kids. Kiddle Encyclopedia.