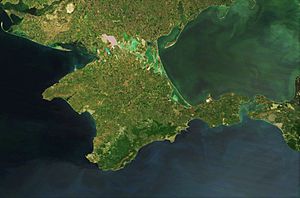 Crimea, (Ukrainian: Крим) sometimes also called The Crimea, is a peninsula in the Black Sea. The peninsula separates the Black Sea from the Sea of Azov. Crimea has a surface of 26,081 square kilometres (10,070 sq mi). About 2.4 million people live there.

The Ottoman Empire had the peninsula for a long time. In the 18th century the Russian Empire took control. The Crimean War was fought here.

Crimea was part of Russia until the Soviet Union gave it to Ukraine in 1954. Ukraine gave it a limited self-rule as an autonomous republic. The seat of the government is Simferopol, which is also the biggest city. Other major cities are Sevastopol and Kerch.

All content from Kiddle encyclopedia articles (including the article images and facts) can be freely used under Attribution-ShareAlike license, unless stated otherwise. Cite this article:
Crimea Facts for Kids. Kiddle Encyclopedia.