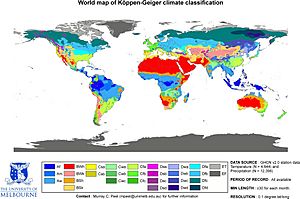 Continental climates are climates with significant annual variation in temperature. They tend to occur in the middles of continents, where prevailing winds come from over land, and temperatures are not moderated by bodies of water such as oceans or seas. They mostly occur in the eastern U.S. and mainland China, and at higher elevations in other parts of the world.

Often winter temperatures are cold enough to support a fixed period of snow each year. Precipitation tends to be moderate, occurring mostly in summer, although there are exceptions such as the upper east coast areas of North America which show an even distribution of precipitation: these are called humid continental climates. Only a few areas, in the mountains of the Pacific Northwest of North America and in Iran, northern Iraq, adjacent Turkey, Afghanistan, Pakistan, and Central Asia show a winter maximum in precipitation. 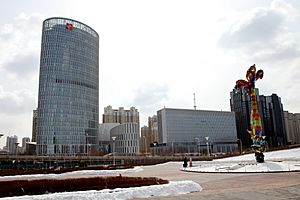 Headquarter of Harbin Bank in Harbin

The timing of intermediate spring-like or autumn-like temperatures in this zone vary depending on latitude and/or elevation. For example, spring may arrive as soon as early March in the southern parts of this zone, or as late as May in the north. Annual precipitation in this zone is usually between 600 millimetres (24 in) and 1,200 millimetres (47 in), most of it in the form of snow during winter. It also has cold winters and warm summers. 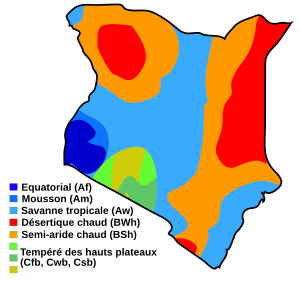 Most such areas fit Köppen classifications of Dfa, Dwa (cold winters, hot summers; "w" indicating very dry winters characteristic especially of China) or Dfb or Dwb (cold winters, warm summers, same distinction for winter dryness). Dry summer continental climates (Dsa and Dsb) exist in high altitude areas near Mediterranean climates. In some cases, the semi-arid climate classification of BSk can also be considered to be continental as long it has cold winter. The definition of this climate regarding temperature is as follows: the mean temperature of the coldest month must be below −3 °C (26.6 °F) and there must be at least four months whose mean temperatures are at or above 10 °C (50 °F). Some climatologists use the 0 °C isotherm instead for the coldest month. 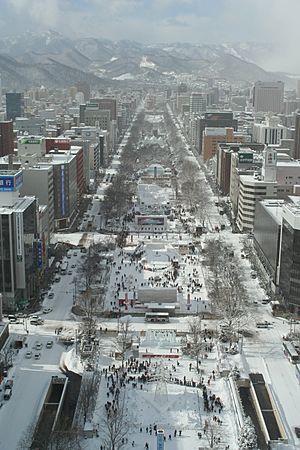 The snowy city of Sapporo

Continental climates exist where cold air masses infiltrate during the winter and warm air masses form in summer under conditions of high sun and long days. Places with continental climates are as a rule either far from any moderating effects of oceans (examples: Omaha, Nebraska and Kazan, Russia) or are so situated that prevailing winds tend to head offshore (example: New York City, USA). Such regions get quite warm in the summer, achieving temperatures characteristic of tropical climates but are much colder than any other climates of similar latitude in the winter.

These climates grade off toward subtropical climates equator-ward where winters are less severe and semiarid climates where precipitation becomes inadequate for tall-grass prairies. In Europe these climates may grade off into oceanic climates in which the influence of moderating air masses is more marked toward the west. The subarctic climate (Köppen: Dfc), with very cold, long and dry winters, but with at least one month above 10 °C (50 °F), might be considered a sub-type of the continental climate. 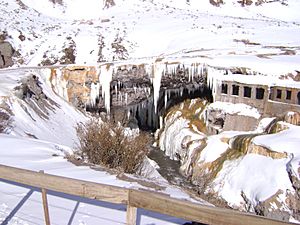 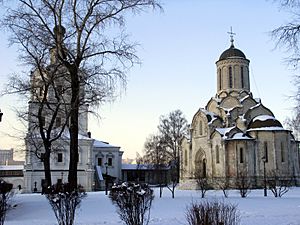 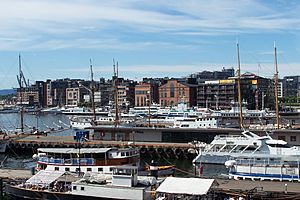 Looking through Charlotte Pass towards the main range in winter 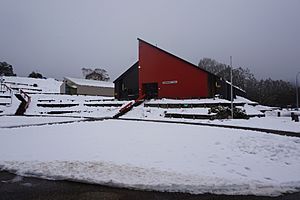 View from Jbel Oukaïmeden in Morocco

Palandöken in August 2009, as seen from downtown Erzurum

All content from Kiddle encyclopedia articles (including the article images and facts) can be freely used under Attribution-ShareAlike license, unless stated otherwise. Cite this article:
Continental climate Facts for Kids. Kiddle Encyclopedia.