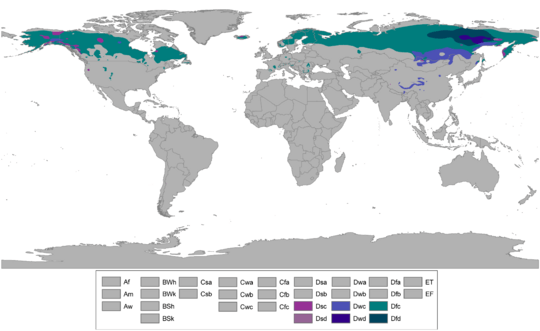 Places with a subarctic climate (also called boreal climate) have long, usually very cold winters, and short, warm summers. It is found on large landmasses, away from oceans, usually at latitudes from 50° to 70°N. Because there are no large landmasses at such latitudes in the Southern Hemisphere, it is only found at high altitudes (heights) in the Andes and the mountains of Australia and New Zealand's South Island. These climates are in groups Dfc, Dwc, Dfd and Dwd in the Köppen climate classification

This type of climate has very big changes in temperature throughout the year. In winter, temperatures can drop to -40 °C (also -40 °F) and in summer, the temperature may go above 30 °C (86 °F). But the summers are short, as there are no more than three months of the year with an average temperature of at least 10 °C (50 °F). However, at least one must have an average temperature of at least 10 °C (50 °F) . In addition, the coldest month must be below 0°C (32°F) The subarctic climate is in between the humid continental climate and the polar climate. The subarctic climate is found in the these places:

With 5–7 months in a row where the average temperature is below freezing, all water in the soil and subsoil freezes several feet deep. In the colder parts of this climate, summer warmth is not enough to thaw (unfreeze) more than a few feet on the top of the soil, so there can be permafrost(soil that is frozen forever). When the ice melts in the summer, 2 to 14 ft (0.6 to 4 m) of soil can thaw, depending on the latitude and the type of soil. Some subarctic climates near oceans (such as southern Alaska and the northern edge of Europe), have milder winters and no permafrost, so it is easier to farm there.

Summer is very short; it has about 45 to 100 days at most, and in a lot of places, the temperatures can go below freezing (32 °F or 0 °C) at any time of the year, even in the summer. Vegetation (plants) in a subarctic climate usually has low diversity (only a few different types of plants grow), because only hardy (very tough) species can survive the long winters and make use of the short summers. Trees are mostly evergreen conifers, because few broadleaved (big leaves) trees can survive the very low temperatures in winter. This type of forest is also known as taiga. The word taiga can also be a name for the climate itself. A lot of plants grow in the taiga (even if there are only a few different kinds of plants), so the taiga (boreal) forest is the largest forest biome on the planet, with most of the forests in Russia and Canada.

Is it usually very hard to farm in subarctic climates, because the soil is infertile (it doesn't have the nutrients that many plants need to grow) and because of the many swamps and lakes that ice sheets make, and only very tough crops can survive the short growing seasons. On the plus side, the days last longer in the summer as you get closer to the poles. So the plants that can grow get a lot of sunlight. Potatoes, strawberries, blueberries and hay for animals grow well. Special varieties of other plants may grow as well.

There is very little precipitation (rain, snow, sleet, or hail); no more than 15 to 20 inches over an entire year. Rain and snow may stay above ground until the ground melts. This means that when the precipitation does soak into the ground, it can be very wet and muddy.

Close to the Earth's poles and the water around the poles, the warmest month has an average temperature of less than 10 °C (50 °F), and the subarctic climate turns into a tundra climate, which is even worse for trees.

Here are some places with subarctic climates:

Some places in the climate group Dfd (a very, very cold subarctic climate) are:

All content from Kiddle encyclopedia articles (including the article images and facts) can be freely used under Attribution-ShareAlike license, unless stated otherwise. Cite this article:
Subarctic climate Facts for Kids. Kiddle Encyclopedia.