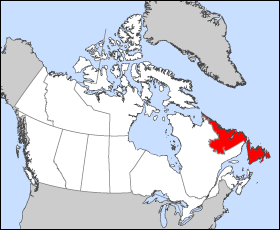 Newfoundland and Labrador in Canada

Not many people live in Labrador; in fact, only 8% of the population of the province of Newfoundland and Labrador lives in it, even though Labrador is twice as big as Newfoundland. Until the 1950s, most of the people who lived there were Aboriginals. Then some Europeans immigrated to the area and worked as merchants; these people were once called Settlers.

All content from Kiddle encyclopedia articles (including the article images and facts) can be freely used under Attribution-ShareAlike license, unless stated otherwise. Cite this article:
Labrador, Canada Facts for Kids. Kiddle Encyclopedia.