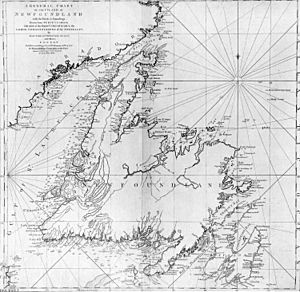 James Cook's map of Newfoundland of 1775

People first came to Newfoundland from countries like Norway, England, Portugal, France, and Ireland in the 16th century. The first explorers were the Vikings from Norway and they settled in L'Anse aux Meadows. They came because of the good fishing off the coast, especially off the south-east coast. Eventually they left because of disagreements with aboriginals.Today, there is still fishing, but not very much because people fished too much, and now there are not many fish left.

Cutting down trees and mining have also been attractions of the island. There are some paper mills (paper factories) in a few cities in Newfoundland.

All content from Kiddle encyclopedia articles (including the article images and facts) can be freely used under Attribution-ShareAlike license, unless stated otherwise. Cite this article:
Newfoundland Facts for Kids. Kiddle Encyclopedia.