Explosives that explode when they are hit are also called mine; Two common types are Land mines and Naval mines. 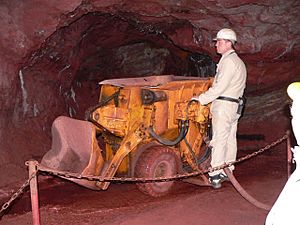 Miner machine with a mine worker

Mining is the process of mining stuff out of the ground. Any material that cannot be grown must be mined. Mining things from the ground is called extraction. Mining can include extraction of metals and minerals, like coal, diamond, gold, silver, platinum, copper, tin and iron. Mining can also include other things like oil and natural gas.

A worker in a mine is called a miner. Underground mining is a dangerous job. Many mines have accidents. Hundreds of miners die every year from accidents, mostly in poor countries. Safety rules and special safety equipment is used to try and protect miners from accidents. Underground coal mining is especially dangerous because coal can give off poisonous and explosive gases.

Some towns are mining towns. People live there because they can make money as miners or by doing things for miners. 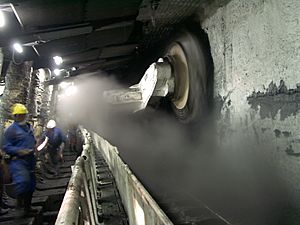 Mining techniques can be divided into two common excavation types: surface mining and sub-surface (underground) mining. Today, surface mining is much more common, and produces, for example, 85% of minerals (excluding petroleum and natural gas) in the United States, including 98% of metallic ores.

Targets are divided into two general categories of materials: placer deposits, consisting of valuable minerals contained within river gravels, beach sands, and other unconsolidated materials; and lode deposits, where valuable minerals are found in veins, in layers, or in mineral grains generally distributed throughout a mass of actual rock. Both types of ore deposit, placer or lode, are mined by both surface and underground methods.

Some mining, including much of the rare earth elements and uranium mining, is done by less-common methods, such as in-situ leaching: this technique involves digging neither at the surface nor underground. The extraction of target minerals by this technique requires that they be soluble, e.g., potash, potassium chloride, sodium chloride, sodium sulfate, which dissolve in water. Some minerals, such as copper minerals and uranium oxide, require acid or carbonate solutions to dissolve.

Surface mining is done by removing (stripping) surface vegetation, dirt, and, if necessary, layers of bedrock in order to reach buried ore deposits. Techniques of surface mining include: open-pit mining, which is the recovery of materials from an open pit in the ground, quarrying, identical to open-pit mining except that it refers to sand, stone and clay; strip mining, which consists of stripping surface layers off to reveal ore/seams underneath; and mountaintop removal, commonly associated with coal mining, which involves taking the top of a mountain off to reach ore deposits at depth. Most (but not all) placer deposits, because of their shallowly buried nature, are mined by surface methods. Finally, landfill mining involves sites where landfills are excavated and processed. Landfill mining has been thought of as a solution to dealing with long-term methane emissions and local pollution 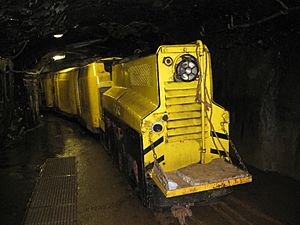 Mantrip used for transporting miners within an underground mine

Sub-surface mining consists of digging tunnels or shafts into the earth to reach buried ore deposits. Ore, for processing, and waste rock, for disposal, are brought to the surface through the tunnels and shafts. Sub-surface mining can be classified by the type of access shafts used, the extraction method or the technique used to reach the mineral deposit. Drift mining utilizes horizontal access tunnels, slope mining uses diagonally sloping access shafts, and shaft mining utilizes vertical access shafts. Mining in hard and soft rock formations require different techniques.

Other methods include shrinkage stope mining, which is mining upward, creating a sloping underground room, long wall mining, which is grinding a long ore surface underground, and room and pillar mining, which is removing ore from rooms while leaving pillars in place to support the roof of the room. Room and pillar mining often leads to retreat mining, in which supporting pillars are removed as miners retreat, allowing the room to cave in, thereby loosening more ore. Additional sub-surface mining methods include hard rock mining, which is mining of hard rock (igneous, metamorphic or sedimentary) materials, bore hole mining, drift and fill mining, long hole slope mining, sub level caving, and block caving. 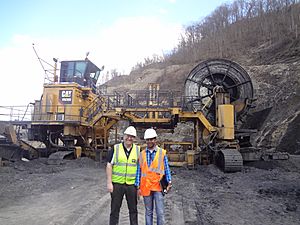 Highwall mining is another form of surface mining that evolved from auger mining. In Highwall mining, the coal seam is penetrated by a continuous miner propelled by a hydraulic Pushbeam Transfer Mechanism (PTM). A typical cycle includes sumping (launch-pushing forward) and shearing (raising and lowering the cutterhead boom to cut the entire height of the coal seam). As the coal recovery cycle continues, the cutterhead is progressively launched into the coal seam for 19.72 feet (6.01 m). Then, the Pushbeam Transfer Mechanism (PTM) automatically inserts a 19.72-foot (6.01 m) long rectangular Pushbeam (Screw-Conveyor Segment) into the center section of the machine between the Powerhead and the cutterhead. The Pushbeam system can penetrate nearly 1,000 feet (300 m) into the coal seam. One patented Highwall mining system uses augers enclosed inside the Pushbeam that prevent the mined coal from being contaminated by rock debris during the conveyance process. Using a video imaging and/or a gamma ray sensor and/or other Geo-Radar systems like a coal-rock interface detection sensor (CID), the operator can see ahead projection of the seam-rock interface and guide the continuous miner's progress. Highwall mining can produce thousands of tons of coal in contour-strip operations with narrow benches, previously mined areas, trench mine applications and steep-dip seams with controlled water-inflow pump system and/or a gas (inert) venting system.

The Bagger 288 is a bucket-wheel excavator used in strip mining. It is also the largest land vehicle of all time. 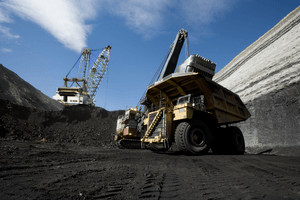 Heavy machinery is used in mining to explore and develop sites, to remove and stockpile overburden, to break and remove rocks of various hardness and toughness, to process the ore, and to carry out reclamation projects after the mine is closed. Bulldozers, drills, explosives and trucks are all necessary for excavating the land. In the case of placer mining, unconsolidated gravel, or alluvium, is fed into machinery consisting of a hopper and a shaking screen or trommel which frees the desired minerals from the waste gravel. The minerals are then concentrated using sluices or jigs.

Large drills are used to sink shafts, excavate stopes, and obtain samples for analysis. Trams are used to transport miners, minerals and waste. Lifts carry miners into and out of mines, and move rock and ore out, and machinery in and out, of underground mines. Huge trucks, shovels and cranes are employed in surface mining to move large quantities of overburden and ore. Processing plants utilize large crushers, mills, reactors, roasters and other equipment to consolidate the mineral-rich material and extract the desired compounds and metals from the ore.

All content from Kiddle encyclopedia articles (including the article images and facts) can be freely used under Attribution-ShareAlike license, unless stated otherwise. Cite this article:
Mining Facts for Kids. Kiddle Encyclopedia.