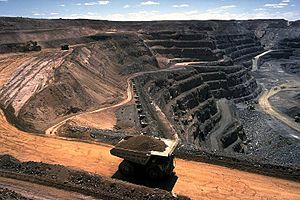 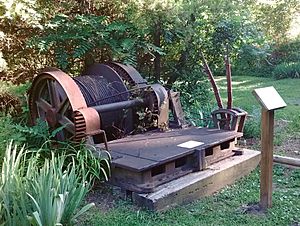 Coal mining is the process of extracting coal from the ground. Coal is valued for its energy content, and, since the 1880s, has been widely used to generate electricity. Steel and cement industries use coal as a fuel for extraction of iron from iron ore and for cement production.

Surface mining is done when the coal is near the surface. Coal miners remove the soil above the coal. The coal can then be removed without the coal miners having to go deep underground.

Underground mining is when the coal is farther underground, making it too expensive to remove soil. In this process, coal miners and all of the coal mining equipment are brought deep underground and coal is carried up out of the ground.

Coal mining has had many developments over the recent years, from the early days of men tunneling, digging and manually extracting the coal on carts, to large open cut and long wall mines. Mining at this scale requires the use of heavy equipment in many different forms. 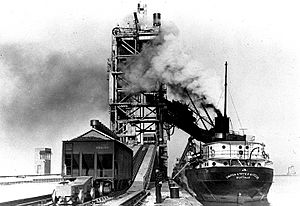 Ships have been used to haul coal since Roman times.

Small-scale mining of surface deposits dates back thousands of years. For example, in Roman Britain, the Romans were exploiting most of the major coalfields by the late 2nd century AD.

The Industrial Revolution, which began in Britain in the 18th century and later spread to continental Europe and North America, was based on the availability of coal to power steam engines. International trade expanded rapidly when coal-fed steam engines were built for the railways and steamships.

Until the late nineteenth century coal was mined underground using a pick and shovel, and children were often employed underground in dangerous conditions. Coal-cutting machines were introduced in the 1880s. By 1912, surface mining was conducted with steam shovels designed for coal mining.

Surface mining and deep underground mining are the two basic methods of mining. Seams relatively close to the surface, at depths less than approximately 180ft (50m), are usually surface mined.

Coal that occurs at depths of 180 to 300ft (50 to 100 m) are usually deep mined, but in some cases surface mining techniques can be used. 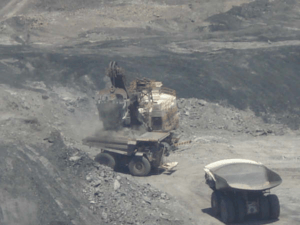 Trucks loaded with coal at the Cerrejón coal mine in Colombia

When coal seams are near the surface, it may be economical to extract the coal using open cut (also referred to as open cast, open pit, mountaintop removal or strip) mining methods. Open cast coal mining recovers a greater proportion of the coal deposit than underground methods, as more of the coal seams in the strata may be exploited. 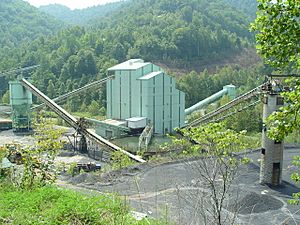 Most coal seams are too deep underground for opencast mining and require underground mining, a method that currently accounts for about 60 percent of world coal production. 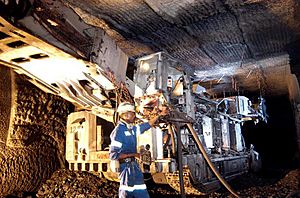 There are six principal methods of underground mining:

Before coal can be used, it must be processed in a coal processing plant. It is made smaller using a sizer and crusher. Parts that might be harmful to any equipment which will use the coal later on, such as the screening for metallic parts inside the mined coal.

Coal is delivered to customers in several ways. Trucks, conveyors, trains and ships transport coal to be used in factories and power plants. 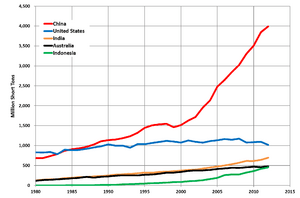 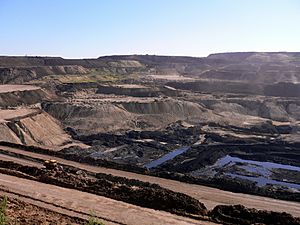 Coal mine in China 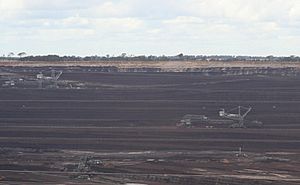 Coal mine in Australia

Coal production has grown fastest in Asia, while Europe has declined. Most coal production is used in the country of origin, with around 16 percent of hard coal production being exported. Coal is mined commercially in over 50 countries.

Coal reserves are available in almost every country worldwide, with recoverable reserves in around 70 countries. At current production levels, proven coal reserves are estimated to last 147 years. However, production levels are by no means level, and are in fact increasing and some estimates are that peak coal could arrive in many countries such as China and America by around 2030.

Technological advancements have made coal mining today more productive than it has ever been. To keep up with technology and to extract coal as efficiently as possible modern mining personnel must be highly skilled and well trained in the use of complex, state-of-the-art instruments and equipment. Many jobs require four-year university degrees. Computer knowledge has also become greatly valued within the industry as most of the machines and safety monitors are computerized.

Surface mining of coal completely eliminates existing vegetation, destroys the genetic soil profile, displaces or destroys wildlife and habitat, degrades air quality, alters current land uses, and to some extent permanently changes the general topography of the area mined. This often results in a scarred landscape with no scenic value.

Mine dumps could produce acid mine drainage which can seep into waterways and aquifers, with consequences on ecological and human health.

If underground mine tunnels collapse, they cause subsidence of the ground above. Subsidence can damage buildings, and disrupt the flow of streams and rivers by interfering with the natural drainage.

Coal production is a major contributor to global warming: burning coal generates large quantities of carbon dioxide and mining operations can release methane, a known greenhouse gas, into the atmosphere. The coal mining industry is working to improve its public image.

All content from Kiddle encyclopedia articles (including the article images and facts) can be freely used under Attribution-ShareAlike license, unless stated otherwise. Cite this article:
Coal mining Facts for Kids. Kiddle Encyclopedia.