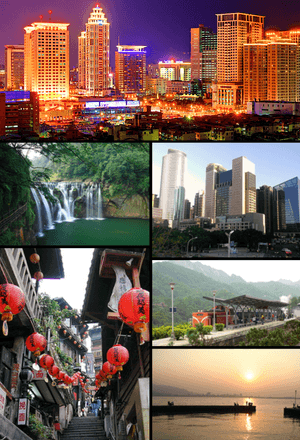 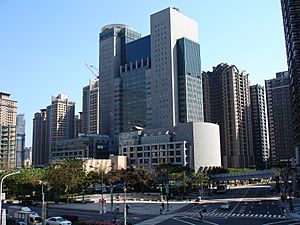 New Taipei City is a special municipality and the most populous city in Taiwan.

Located in northern Taiwan, the city includes a substantial stretch of the island's northern coastline and surrounds the Taipei Basin, making it the second largest special municipality by area, behind Kaohsiung. New Taipei City is bordered by Keelung to the northeast, Yilan County to the southeast, and Taoyuan to the southwest.

It completely surrounds Taipei. Banqiao District is its municipal seat and biggest commercial area. Until 2010, the area that roughly corresponds to the present New Taipei City was known as Taipei County.

Archaeological records show that New Taipei City had been inhabited since the Neolithic period, with artifacts dug in Bali District having shown remains as early as 7000 to 4700 BC.

The region around New Taipei City area was once inhabited by Ketagalan plains aborigines, and evidence shows that the Atayal had inhabited Wulai District. The earliest recorded migration by people from mainland China dated back as early as 1620, when the local tribes were driven into the mountain areas. Over the years, many of the aborigines have assimilated into the general population.

During the Qing Dynasty rule of Taiwan, the Han Chinese people began to settle in the area now designated as New Taipei City in 1694 and the number of immigrants from mainland China had further increased. After decades of development and prosperity, Tamsui had become an international commercial port by 1850. British consulate and stores were established in the region, which helped promote the local tea business, resulting in massive tea leaf exports to Europe. In 1875, Shen Baozhen called for the establishment of Taipeh Prefecture. Fujian-Taiwan-Province was declared in 1887 and the present-day New Taipei City area fell under the jurisdiction of Taipeh Prefecture.

In 1895, Taiwan was ceded by the Qing dynasty to the Empire of Japan. During Japanese rule, the New Taipei City area was administered under Taihoku Prefecture together with modern-day Taipei, Keelung and Yilan County. Gold and other mineral deposits were discovered at Keelung Mountain, triggering a mining boom in the region.

In October 1896, the Japanese government divided the mining area around Keelung Mountain into two districts: an eastern district, designated as Kinkaseki, and a western district, designated as Kyūfun. Both districts are now parts of Ruifang District. They also issued regulations barring local Taiwanese mining companies from mining in the area, giving the mining rights to Japanese companies instead.

After the handover of Taiwan from Japan to the Republic of China in October 1945, from 25 December of the same year, the present New Taipei City area was administered as Taipei County with Banqiao City as the county seat. In July 1949, the size of Taipei County was reduced when Beitou and Shilin townships were put under the jurisdiction of the newly created Caoshan Administrative Bureau, which would later be renamed the Yangmingshan Administrative Bureau. On July 1, 1968, the size of Taipei County was further reduced by 205.16 km2 (79.21 sq mi) when Jingmei, Muzha, Nangang, and Neihu townships, along with Beitou and Shilin, were merged into Taipei City.

On 25 December 2010, Taipei County was upgraded to a special municipality as New Taipei City consisting of 29 districts with Banqiao District as the municipal seat. 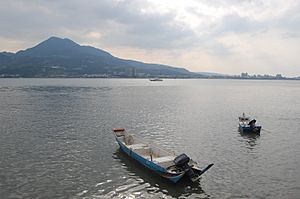 New Taipei City is located at the northern tip of Taiwan Island. It covers a vast territory with a varied topology, including mountains, hills, plains and basins. In the northern part lies 120 km (75 mi)of coastline with gorgeous shorelines and beaches. The Tamsui River is the main river flowing through New Taipei City. Other large tributaries are the Xindian, Keelung and Dahan rivers, sections of which constitute riverside parks. The tallest peak in the city is Mount Zhuzi, standing at 1,094 m and located in the Sanzhi District.

The climate of the city is characterized as a humid subtropical climate with seasonal monsoons with ample rainfall evenly distributed throughout the year. Seasonal variations of temperatures are noticeable although temperatures typically varies from warm to hot throughout the year, except when cold fronts strikes during the winter months when temperatures can sometimes dip below 10 °C (50 °F). January is typically the coolest month and July is usually the warmest. 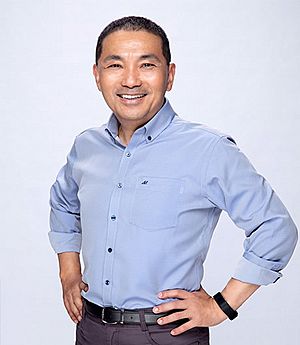 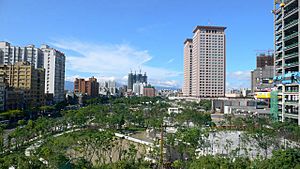 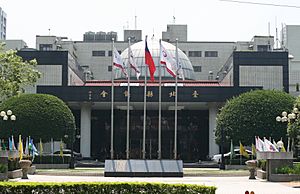 New Taipei City has an estimated population of around 3.9 million. Over 80% of New Taipei City's residents live in the 10 districts that were formerly county-controlled cities (Banqiao, Luzhou, Sanchong, Shulin, Tucheng, Xizhi, Xindian, Xinzhuang, Yonghe and Zhonghe), which account for one-sixth of the area. 28.80% of the residents moved into the area from Taipei City. Around 70% of the population living in New Taipei City come from different parts of Taiwan, and there are around foreigners residing in the city, making New Taipei City the third largest municipality in Taiwan in terms of foreign resident population.

The city is home to 952 registered temples and 120 churches, including 160 Buddhist-Taoist temples and more than 3,000 Taoist shrines. The city also houses five major Buddhist monasteries, such as the Dharma Drum Mountain in Jinshan District and Ling-jiou Mountain Monastery in Gongliao District. On average, there are two worship places in every square kilometer around the city. Xizhi District and Sanxia District have the highest number of registered temples, while Wulai District has the fewest. New Taipei City houses the Museum of World Religions in Yonghe District.

New Taipei City is home to the Banqiao Stadium and Xinzhuang Baseball Stadium. 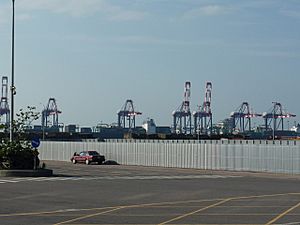 Due to its strategic location, New Taipei City is the second major city of business industries after Taipei, with over 250,000 privately owned companies and 20,000 factories scattered around five industrial parks with a total capital of NT$1.8 trillion.

There are also many high technology industry, service industry and tourism industry, contributing a significant amount of GDP to Taiwan. The five major industries in the city are information technology (IT), telecommunications, digital contents, biotechnology and precision instruments.

The city is among the top three cities in the global market in terms of IT product production volume, securing more than 50% of the global market share for products such as motherboards, notebooks, LCD monitors and CRT monitors.

The Port of Taipei located in Bali District has the capability of fitting container ships weighing up to 80,000 tons and transporting more than 2 millions of TEU annually. The Tamsui Fisherman's Wharf in Tamsui District serves as the main port for fishing boats, as well as for sightseeing and leisure. 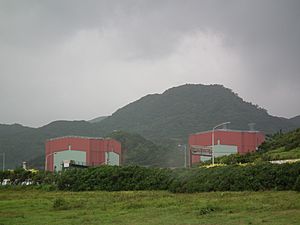 New Taipei City has been developed towards a Green Future City. 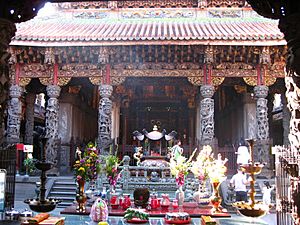 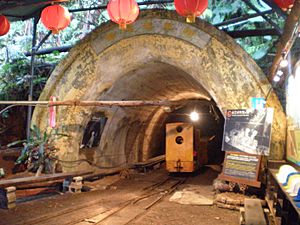 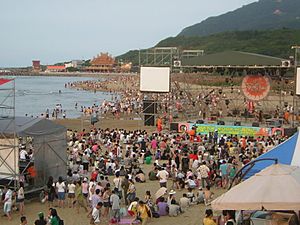 New Taipei City has a wide range of historical, natural and cultural attractions for tourists. Tourism-related industries in the city are governed by the Tourism and Travel Department of New Taipei City Government.

The most famous temple is the Zushi Temple in Sanxia District. Jinshan District houses the Dharma Drum Mountain.

New Taipei City regularly hosts around 5,000 annual art, music and cultural festivals, such as the Hohaiyan Rock Festival in Gongliao District. The Lantern Festival is held regularly in the city particularly in Pingxi District, where sky lanterns are made throughout the year for people to buy. Guests can also learn how to make their own lanterns, paint their hopes, dreams and wishes on them, then release them to the sky in the hopes that their prayers will be answered. 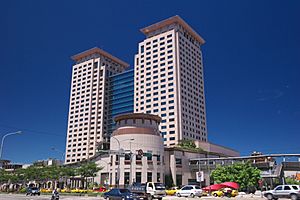 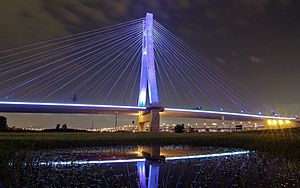 The area is served by Taiwan High Speed Rail through the Banqiao Station, which is an intermodal station with Taiwan Railway Administration (TRA) and Taipei Metro.

The Taipei Metro serves the area through the Tamsui Line in Tamsui, the Zhonghe Line in Yonghe and Zhonghe, the Luzhou Line in Sanchong and Luzhou, the Xinzhuang Line in Xinzhuang, Sanchong, and Taishan, the Xindian Line in Xindian, and the Bannan Line from Banqiao on out.

The area's air traffic is served by Taiwan Taoyuan International Airport in neighboring Taoyuan City and Songshan Airport in Taipei.

All content from Kiddle encyclopedia articles (including the article images and facts) can be freely used under Attribution-ShareAlike license, unless stated otherwise. Cite this article:
New Taipei City Facts for Kids. Kiddle Encyclopedia.