The Chinese language is the group of languages used by Chinese people in China and elsewhere. It forms part of a language family called the Sino-Tibetan family of languages.

Chinese includes many regional language varieties, the main ones being Mandarin, Wu, Yue and Min. These are not mutually intelligible and many of the regional varieties are themselves a number of non-mutually-intelligible subvarieties. As a result, many linguists refer to these varieties as separate languages.

'Chinese' can refer to the written or the spoken languages. Although there are many spoken Chinese languages, they use the same writing system. Differences in speaking are reflected in differences in writing. Official China adopts a similar policy to the one in the Soviet Union, using one official language so people can understand each other. The Standard Chinese language is referred to as Mandarin in English, "Pǔtōnghuà" or "common to everybody speech" in mainland China and "Guóyǔ" or "language of the whole country" in Taiwan. All official documents are written in Mandarin and Mandarin is taught all over China. It is also a standard for language teaching in some other countries.

Chinese is used by the Han people in China and other ethnic groups in China who are declared Chinese by the Chinese government. Chinese is almost always written in Chinese characters. They are symbols that have meaning, called logograms. They also give some indication of pronunciation, but the same character can get very different pronunciations among the different kinds of Chinese. Since Chinese characters have been around for at least 3500 years, people in places far from each other say them differently, just as "1, 2, 3" can be read differently in different languages.

Chinese people needed to write down pronunciations in dictionaries. Chinese does not have an alphabet, so how to write down sounds was a big problem in the beginning. Nowadays the Mandarin language uses Hanyu Pinyin to represent the sounds in Roman letters.

The Chinese language is like a big tree. The base of the tree started thousands of years ago. It now has several main limbs. Some people call "just a branch" what other people call a main limb, so you can say there are six or seven main limbs. Each of these main limbs splits off into branches about the way there are branches of English spoken in Great Britain, the United States, Australia, India, and so forth. Just as the Romance languages all come from the area around Rome and are based on Latin, the Chinese languages all have some common source, so they keep many common things among them. 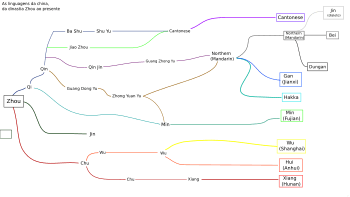