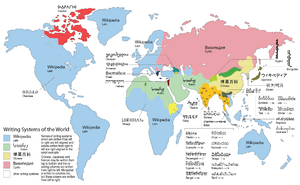 Writing systems of the world today.

A writing system is a system of symbols that are used to represent language.

There are different kinds of writing systems, with symbols that represent different things: logographic, syllabic and alphabetic. Beside natural scripts, there are also constructed scripts.

Alphabets that do not show vowels but only consonants are called abjads. Examples of abjads are the Arabic alphabet, which is used in much of the Muslim world, and the Hebrew alphabet used for Jewish languages like Hebrew and Yiddish. Both of these abjads are written in lines that run from right to left.

Abugidas are alphabets where sequences of consonant+vowel are written as a unit based on the consonant letter, and one of the vowels is never written but understood by the consonant letter if no other vowel is written. Examples of abugidas are writing systems of India and Southeast Asia like Devanagari used for Hindi and Sanskrit.

All content from Kiddle encyclopedia articles (including the article images and facts) can be freely used under Attribution-ShareAlike license, unless stated otherwise. Cite this article:
Writing system Facts for Kids. Kiddle Encyclopedia.