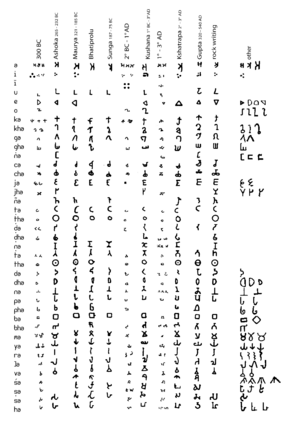 Hindi is an Indo-Aryan language. It is the main language in India. It is the fifth most spoken language in the world with about 182 million native speakers in 1998. The Devanāgarī script is used to write Hindi. Previously Hindi was known as Hindui.

Hindi is widely written, spoken and understood in North India and some other places in India. In 1997, a survey found that 45% of Indians can speak Hindi. It has taken words from the Dravidian languages of South India, as well as the Arabic, Persian, Chagatai, English and Portuguese languages.

Hindi and Urdu were considered the same language but have evolved into separate dialects. However, to this day, both languages are mutually intelligible, meaning their speakers can understand each other without knowing the other language. Urdu, however, is written in the completely different Arabic alphabet.

Hindi developed from Sanskrit, the ancient language of India. Hindi started to develop in the 7th century as "Apabhramsha" and became stable by the 10th century. Some famous Hindi poets are Tulsidas and Kabir.

Hindi is also spoken with regional accents like Haryanvi and Rajasthani. Bombay Hindi is spreading because Bollywood films use it.

Hindi Diwas is an annual celebration on 14th September. It commemorates the law of 1949 that made Hindi the legal language of the Republic.

All content from Kiddle encyclopedia articles (including the article images and facts) can be freely used under Attribution-ShareAlike license, unless stated otherwise. Cite this article:
Hindi Facts for Kids. Kiddle Encyclopedia.