The Indo-Iranian languages are the largest group of the Indo-European language family. They include the Indo-Aryan (Indic) and Iranic (Iranian) languages. They are mostly spoken in the Indian subcontinent and the Iranian plateau. Originally, they were spoken in Central Asia, to the east of the Caspian Sea.

There are about 221 Indo-Aryan (Indic) languages, with more than 800 million speakers.

Below are the most widely spoken Indo-Aryan languages. 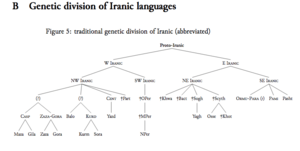 There are about 86 Iranian languages, with between 150 and 200 million speakers.

Below are the most widely spoken Iranian languages.

All content from Kiddle encyclopedia articles (including the article images and facts) can be freely used under Attribution-ShareAlike license, unless stated otherwise. Cite this article:
Indo-Iranian languages Facts for Kids. Kiddle Encyclopedia.