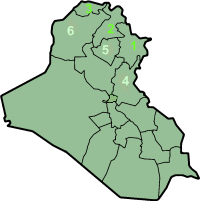 Iraqi Kurdistan is a huge mountain range, where the highest point is 3.611 meters, known as Cheekha Dar. The biggest lake is Dukan.

Iraqi Kurdistan is divided into 6 provinces.

The population in Iraqi Kurdistan is about 5-6 million. Most of these people are Sunni Muslims. There are also many Yazidis, Kakeyís and Christians. Kurds make the ethnic majority in the region while the Turkmen, Aramean, Assyrians, Armenians and Arabs make up the rest of the western part of the area.

All content from Kiddle encyclopedia articles (including the article images and facts) can be freely used under Attribution-ShareAlike license, unless stated otherwise. Cite this article:
Iraqi Kurdistan Facts for Kids. Kiddle Encyclopedia.