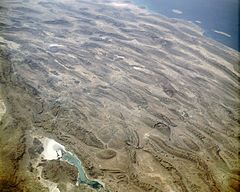 The Zagros Mountains from space, September 1992

The Zagros Mountains (Kurdish: Zagros - زاگرۆس, Persian: رشته كوههاى زاگرس), make up Iran's and Iraq's largest mountain range. They have a total length of 1 500 km. The north end is in northwestern Iran and they run near the border with Iraq and along the north coast of the Persian Gulf. The mountain range ends at the Straits of Hormuz. The highest points in the Zagros Mountains are Zard Kuh (4 548 m) and Mt. Dena (4 359 m).

The Zagros region is an important part of Persian Gulf oil production.

All content from Kiddle encyclopedia articles (including the article images and facts) can be freely used under Attribution-ShareAlike license, unless stated otherwise. Cite this article:
Zagros Mountains Facts for Kids. Kiddle Encyclopedia.