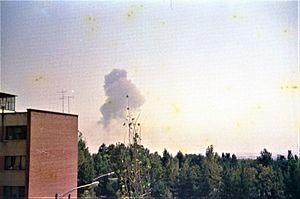 Explosion in Mehrabad Air Base in Tehran after Iraqi forces attacked Tehran on September 22, 1980

The war began when Iraq invaded Iran on 22 September 1980, after a long history of border disputes and demands for the overthrow of Saddam Hussein's regime. Iraqi forces did well at the beginning of the war, taking Iranian Khuzestan, but before long they were stopped and forced out of Iran. The war continued for years, and neither side gained much ground in the resulting trench warfare. About a million soldiers died and a similar number of civilians. Both sides used blockade, which other countries opposed. Despite several calls for an end to the fighting by the United Nations Security Council, the two countries fought until 20 August 1988; the last prisoners of war were exchanged in 2003. The war changed politics in the Middle East and worldwide.

The Iran–Iraq War is also noted for Iraq's use of chemical weapons and biological weapons against Iranian troops and civilians. The role of the United States and Soviet Union was very important, dating back to the Cold War. In 1953, the US encouraged a coup d'état against Mohammad Mosaddegh, who was the Prime Minister of Iran. Shah Mohammad Reza Pahlavi returned to power, supporting his military and his government. The United States sold many weapons to the Shah's government. Meanwhile, revolutionaries of the Arab Socialist Ba'ath Party overthrew the king of Iraq and, with the help of the Soviet Union, built up their army. Starting with the United Arab Republic, they sought to unite all the Arabs into one state, including the Arab minority in Iran.

After the war started, (especially between 1983 and 1988) the United States sold weapons to the Iraqis. This move was largely due to America's interest in containing the revolutionary Ayatollah Khomeini. Thus, both the Soviet Union and the United States supplied Iraq with weapons to use against Iran. The United States had sold many weapons to Iran before the war. it was believed the soviet union was selling weapons to both sides during the war.

All content from Kiddle encyclopedia articles (including the article images and facts) can be freely used under Attribution-ShareAlike license, unless stated otherwise. Cite this article:
Iran–Iraq War Facts for Kids. Kiddle Encyclopedia.