Missing in action facts for kids 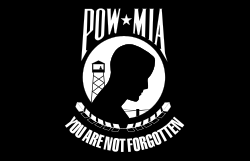 the POW/MIA flag for the Prisoners and Missing in Wars

Missing in action (MIA) refers to a soldier who is reported to have gone missing during active service. The soldier may have been killed, injured, captured or deserted. It is not known what happened to them. If they are dead, neither their body nor grave can be found or identified. Going missing in action has been a risk for people in armed forces for as long as there has been war.

According to official US Department of Army and Department of Navy casualty records, submitted to Congress in 1946 and updated in 1953, the combined possible total of missing service personnel worldwide is closer to approximately 6600 and probably considerably fewer. Since DPAA alone designates such WWII personnel as the crew of the USS Arizona and most of that of USS Oklahoma as both "missing" and "unaccounted-for" it is possible that DPAA records keeping may be somewhat idiosyncratic.

According to the US Dept of Defense as of January 14,2021: Total of working number of MIA US Servicemen: 7,567

All content from Kiddle encyclopedia articles (including the article images and facts) can be freely used under Attribution-ShareAlike license, unless stated otherwise. Cite this article:
Missing in action Facts for Kids. Kiddle Encyclopedia.