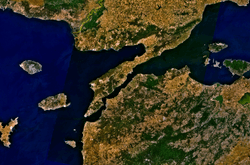 Satellite image of the Gallipoli peninsula and surrounding area

The Gallipoli peninsula ( Turkish: Gelibolu Yarımadası; Greek: Καλλίπολη) is in Turkish Thrace, the European part of Turkey. To the west there is the Aegean Sea and to the east there are the Dardanelles straits.

After an earthquake in 1354, the Greek city of Gallipoli was abandoned, then occupied by Turks from Anatolia. This made it the first Ottoman position in Europe.

The peninsula was part of the Byzantine Empire. The Ottoman Empire slowly conquered it from 13th century to the 15th century. By the 19th century, thirty thousand people lived in the city: Greeks, Turks, Armenians and Jews.

It was a big military camp for the British and French forces during the Crimean War (1854). It was also a stopping-off point on the way to Constantinople.

In World War I, Gallipoli was the site of the Gallipoli Campaign.

All content from Kiddle encyclopedia articles (including the article images and facts) can be freely used under Attribution-ShareAlike license, unless stated otherwise. Cite this article:
Gallipoli Facts for Kids. Kiddle Encyclopedia.