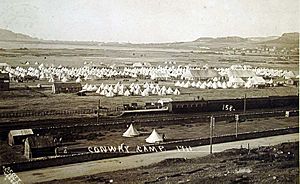 A military camp or bivouac is a semi-permanent facility for where an army stays when it is not at its military base. Camps are erected when a military force travels away from a major installation or fort during training. It is also used for operations, and often form large campsites.

In the Roman era the military camp served an entire legion. Archaeological investigations have revealed many details of these Roman camps in places such as England and Scotland.

All content from Kiddle encyclopedia articles (including the article images and facts) can be freely used under Attribution-ShareAlike license, unless stated otherwise. Cite this article:
Military camp Facts for Kids. Kiddle Encyclopedia.