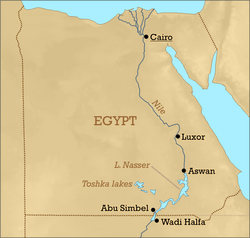 Map of Lake Nasser showing the location of Wadi Halfa

Wadi Halfa is a small city in the northern part of Sudan by Lake Nubia (the Sudanese section of Lake Nasser).

It has 6 neighborhoods with inhabitants of 18,000 people. There is a highway under construction which will connect it with Aswan in Egypt and via Dongola with Khartoum.

Wadi Halfa is now one of fastest growing cities in Sudan.

in 1964 when the Aswan Dam was built, the old city of Wadi Halfa was flooded and Nubians were forced to relocate in New Halfa. Now there is a huge number of Nubians are immigrating back to their mother land.

Wadi Halfa is a home of Geology and earth science college with student body of more than 500 students.

All content from Kiddle encyclopedia articles (including the article images and facts) can be freely used under Attribution-ShareAlike license, unless stated otherwise. Cite this article:
Wadi Halfa Facts for Kids. Kiddle Encyclopedia.