Khartoum is the capital and largest city of Sudan. It is located at the confluence of the White Nile, flowing north from Lake Victoria, and the Blue Nile, flowing west from Ethiopia. The location where the two Niles meet is known as "The Confluence". The main Nile continues to flow north towards Egypt and the Mediterranean Sea.

Divided by the two Rivers Nile, Khartoum is a metropolis with an estimated overall population of over five million people, consisting of Khartoum proper, and linked by bridges to Khartoum North and Omdurman to the west. The city is the capital of the state of Khartoum. 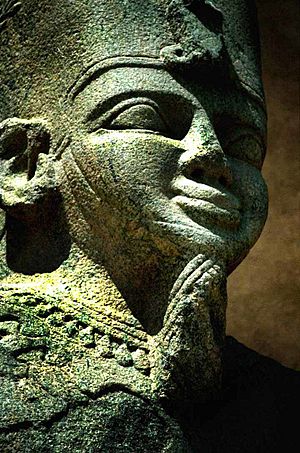 A statue, claimed to depict Natakamani, at the front of the National Museum of Sudan

In 1821, Khartoum was established north of the ancient city of Soba, by Ibrahim Pasha, the son of Egypt's ruler, Muhammad Ali Pasha, who had just incorporated Sudan into his realm. Originally, Khartoum served as an outpost for the Egyptian Army, but the settlement quickly grew into a regional centre of trade. It also became a focal point for the slave trade. Later, it became the administrative center of Sudan and official capital.

On 13 March 1884, troops loyal to the Mahdi Muhammad Ahmad started a siege of Khartoum, against defenders led by British General Charles George Gordon. The siege ended in a massacre of the Anglo-Egyptian garrison when on 26 January 1885 the heavily-damaged city fell to the Mahdists. 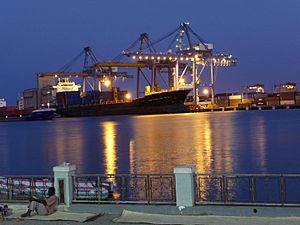 Throughout the 1970s and 1980s, Khartoum was the destination for hundreds of thousands refugees fleeing conflicts in neighboring nations. Since the mid-1980s, large numbers of refugees from South Sudan and Darfur fleeing the violence of the Second Sudanese Civil War and Darfur conflict have settled around Khartoum. In 1977, the first oil pipeline between Khartoum and the Port of Sudan was completed.

In 1991, Osama bin Laden purchased a house in the affluent al-Riyadh neighborhood of the city and another in Soba. He lived there until 1996, when he was banished from the country.

Following the 1998 U.S. embassy bombings, the United States accused bin Laden's al-Qaeda group and, on 20 August, launched cruise missile attacks on the al-Shifa pharmaceutical factory in northern Khartoum. The destruction of the factory produced diplomatic tension between the U.S. and Sudan. The factory ruins are now a tourist attraction. 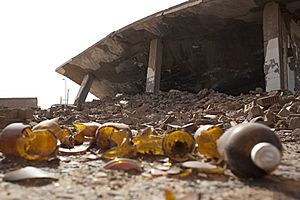 Destruction of the al-Shifa pharmaceutical factory

On 10 May 2008, the Darfur rebel group, Justice and Equality Movement, moved into the city, where they engaged in heavy fighting with Sudanese government forces. Their goal was to topple Omar al-Bashir's government, though the Sudanese government succeeded in beating back the assault. 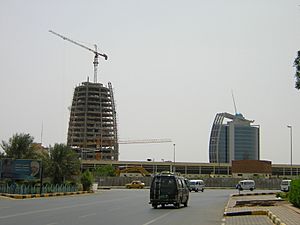 After the signing of the historic Comprehensive Peace Agreement between the government of Sudan and the Sudan People's Liberation Movement, the Government of Sudan began a massive development project. In 2007, the biggest projects in Khartoum were the Al-Mogran Development Project, two five-star hotels, a new airport, Mac Nimir Bridge and the Tuti Bridge that links Khartoum to Tuti Island. 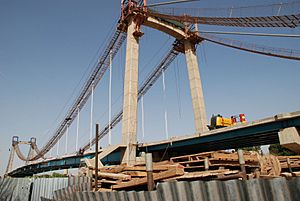 In the 21st century, Khartoum developed based on Sudan's oil wealth. Sudan has seen a huge surge in infrastructure and technology, which has led to many new and innovative building concepts, ideas and construction techniques. There is now a constant flow of new projects arising, thus leading to a new, transformed, modernised form of architecture.

Among the city's industries are printing, glass manufacturing, food processing, and textiles. Petroleum products are now produced in the far north of Khartoum state, providing fuel and jobs for the city. One of Sudan's largest refineries is located in northern Khartoum.

The Souq Al Arabi is Khartoum's largest open air market. The "souq" is spread over several blocks in the center of Khartoum proper just south of the Great Mosque (Mesjid al-Kabir) and the minibus station. It is divided into separate sections, including one focused entirely on gold. Al Qasr Street and Al Jamhoriyah Street are considered the most famous high streets in Khartoum State.

Afra Mall is located in the southern suburb Arkeweet. The Afra Mall has a supermarket, retail outlets, coffee shops, a bowling alley, movie theaters, and a children's playground. In 2011, Sudan opened the Hotel Section and part of the food court of the new, Corinthia Hotel Tower.

The largest museum in all of Sudan is the National Museum of Sudan. Founded in 1971, it contains works from different epochs of Sudanese history. Among the exhibits are two Egyptian temples of Buhen and Semna, originally built by Queen Hatshepsut and Pharaoh Tuthmosis III, but relocated to Khartoum upon the flooding of Lake Nasser.

The Republican Palace Museum, opened in 2000, is located in the former Anglican All Saints' cathedral on Sharia al-Jama'a, next to the historical Presidential Palace. The Ethnographic Museum is located on Sharia al-Jama'a, close to the Mac Nimir Bridge. Khartoum is home to a botanical garden, in the Mogran district of the city.

All content from Kiddle encyclopedia articles (including the article images and facts) can be freely used under Attribution-ShareAlike license, unless stated otherwise. Cite this article:
Khartoum Facts for Kids. Kiddle Encyclopedia.