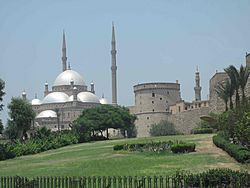 Muhammad Ali Pasha al-Mas'ud ibn Agha (4 March 1769 – 2 August 1849) was an Albanian commander in the Ottoman army. He became Wāli, and self-declared Khedive of Egypt and Sudan.

Though not a modern nationalist, he was the founder of modern Egypt because of the dramatic reforms he made to the army, economy, and culture of Egypt. He also ruled some Levantine territories outside Egypt. The dynasty he established ruled Egypt and Sudan until the Egyptian Revolution of 1952.

Muhammed Ali was born in the Ottoman Empire, in the area which is now the Greek province of Macedonia. His parents were Albanian, and their language was the only one he spoke well. He also spoke some Turkish, but not Arabic. He led a group of Albanian troops sent to Egypt. They were part of an Ottoman force that reoccupied Egypt after Napoleon's French troops left. The Ottomans had ruled Egypt by a Wali (Governor) with Mamluk troops. The Mamluks were former slaves.

The French Capitulation of Alexandria left a power vacuum in the Ottoman province. Mamluk power had been weakened, but not destroyed, and Ottoman forces clashed with the Mamluks for power. During this period of anarchy Muhammad Ali used his loyal Albanian troops to play both sides, gaining power and prestige for himself. As the conflict drew on, the local populace grew weary of the power struggle. A group of prominent Egyptians demanded that the then Wāli, Ahmad Khurshid Pasha, step down and Muhammad Ali be installed as the new Wāli in 1805.

Muhammad Ali’s goal was to establish a powerful, European-style state. To do that, he had to reorganize Egyptian society, streamline the economy, train a professional bureaucracy, and build a modern military.

In practice, Muhammad Ali’s land reform amounted to a monopoly on trade in Egypt. He required all producers to sell their goods to the state. The state in turn resold Egyptian goods, and kept the surplus. This was very profitable for Egypt, especially with their cotton, which was of high quality. The new-found profits also extended down to the individual farmers, as the average wage increased fourfold.

Beyond building a more modern economy, Muhammad Ali started to train a professional military and bureaucracy. He sent promising men to Europe to study. Students were sent to study European languages, primarily French, so they could translate military manuals into Arabic. He then used both educated Egyptians and imported European experts to establish schools and hospitals in Egypt. European education also provided talented Egyptians with social mobility. Bright boys from poor families could work their way up, and become successful.

A byproduct of Muhammad Ali’s training program was the establishment of a Civil service. Establishing an efficient central bureaucracy was needed for Muhammad Ali’s other reforms. In the process of destroying the Mamluks, the Wāli had to fill the posts that the Mamluks had previously filled. He divided Egypt into ten provinces, each leader responsible for collecting taxes and maintaining order. Muhammad Ali installed his sons in most key positions; however, his reforms did offer Egyptians opportunities beyond agriculture and industry.

At the start, Muhammad Ali waged war on behalf of the Ottoman Sultan, Mahmud II, in Arabia, and Greece. Later, he came into open conflict with the Ottoman Empire.

His first military campaign was an expedition into the Arabian Peninsula. The holy cities of Mecca, and Medina had been captured by the House of Saud, who held a form of Islam called Wahhabism. Armed with their new religious zeal, the Muhammad ibn Saud began conquering parts of Arabia.

With the main Ottoman army tied up in Europe, Mahmud II turned to Muhammad Ali to recapture the Arabian territories. Muhammad Ali in turn appointed his son, Tusun Pasha, to lead a military expedition in 1811. The campaign was turned back in Arabia; however, a second attack was launched in 1812 that recaptured Hejaz.p43-44 After a two-year campaign, the Saudis were crushed and most of the Saudi family was captured. The family leader, Abdullah ibn Saud, was sent to Istanbul, and executed.p48

Muhammad Ali next turned his attention to military campaigns of his own design, beginning with the Sudan which he viewed as a valuable addition of territory, gold, and slaves. Sudan at the time had no real central authority and used primitive weaponry in its tribal infighting.

In 1820 Muhammad Ali dispatched an army of 5,000 troops commanded by his third son, Ismail, south into Sudan with the intent of conquering the territory and subjugating it to his authority.p51 Ali's troops made headway into Sudan in 1821, but met with fierce resistance. Ultimately, Egyptian troops and firearms ensured the conquest of Sudan. Ali now had an outpost from which he could expand to the source of the Nile in Ethiopia, and Uganda. His administration captured slaves from the Sudan, who were then made into a foot regiment of soldiers. Ali's harsh reign in Sudan, and that of his immediate successors, led eventually to the popular independence struggle of the self-proclaimed Mahdi, Muhammed Ahmed, in 1881.

As Muhammad Ali was expanding his authority into Africa, the Ottoman Empire faced ethnic rebellions in its European territories. The rebellion in the Greek provinces of the Ottoman Empire began in 1821. The Ottoman army failed to put down the revolt, and ethnic violence spread as far as Constantinople. Sultan Mahmud II offered Muhammad Ali the island of Crete in exchange for his support in putting down the revolt.

Muhammed Ali sent 16,000 soldiers, 100 transports, and 63 escort vessels under command of his son, Ibrahim Pasha.p71. Britain, France, and Russia intervened to protect the Greeks. On 20 October 1827 at the Navarino, the entire Egyptian navy was sunk by the European Allied fleet under the command of Admiral Edward Codrington (1770–1851). Muhammad Ali suffered the loss of his competent, expensive navy. With its fleet destroyed, Egypt had no way to support its forces in Greece and was forced to withdraw. Ultimately the campaign cost Muhammad Ali his navy for no gains.

To compensate for his and Egypt's losses, the conquest of Syria was set in motion. Like other rulers of Egypt before him, Ali desired to control the Levant, both for its strategic value and for its rich natural resources. Not only had Syria abundant natural resources, it also had a thriving international trading community with well-developed markets throughout the Levant. It would be a captive market for the goods now being produced in Egypt. Perhaps best of all, Syria was desirable as a buffer state between Egypt and the Ottoman Sultan.

A new fleet was built, a new army was raised and on 31 October 1831, under Ibrahim Pasha, the Egyptian invasion of Syria started the First Turko-Egyptian War. The Egyptians overran most of Syria with ease. The strongest and only really significant resistance was put up at the port city of Acre. The Egyptian force eventually captured the city after a six-month siege. Unrest on the Egyptian home front increased during the course of the siege. Ali was forced to squeeze Egypt more and more to support his campaign, and his people resented the increased burden.

After the fall of Acre, the Egyptian army marched north into Anatolia. At the Battle of Konya (21 December 1832), Ibrahim Pasha soundly defeated the Ottoman army led by the Grand Vizier Reshid Pasha. There were now no military obstacles between Ibrahim's forces and Constantinople itself.

Through the course of the campaign, Muhammad Ali watched the European powers carefully. Fearing another intervention that would reverse all his gains, he proceeded slowly and cautiously. For example, he continued the practice of using the Sultan’s name at Friday prayers in the newly captured territories. He continued to circulate Ottoman coins instead of issuing new ones bearing his likeness.p111 So long as Muhammad Ali’s march did not threaten the complete collapse of the Ottoman state, the powers in Europe remained passive observers.

Despite this show, Muhammad Ali's goal was now to remove the current Ottoman Sultan Mahmud II and replace him with the sultan's son, the infant Abdülmecid. This possibility so alarmed Mahmud II that he accepted Russia's offer of military aid. This led to the Treaty of Hünkâr İskelesi.p72 Russia's gain dismayed the British and French governments, so they worked for a negotiated solution. In May 1833 the Convention of Kutahya was signed.

The terms of the peace were that Ali would withdraw his forces from Anatolia and receive the territories of Crete and the Hijaz as compensation. Ibrahim Pasha would be appointed Wāli of Syria. The peace agreement fell short, however, of granting Muhammad Ali an independent kingdom for himself, leaving him wanting.p122

All content from Kiddle encyclopedia articles (including the article images and facts) can be freely used under Attribution-ShareAlike license, unless stated otherwise. Cite this article:
Muhammad Ali Pasha Facts for Kids. Kiddle Encyclopedia.