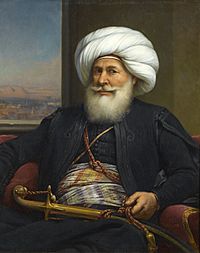 The term Khedive was the title of the Egyptian rulers from 1867 to 1914. It was given to the Turkish ruler of Egypt by the Ottoman Sultan, and removed by the British Empire when the Ottomans joined Germany in World War I. It is a title largely equivalent to the English word viceroy.

The title was first used by Muhammad Ali Pasha, an Albanian general who seized power in Egypt as Wali (Governor) under the Turks. His family was not recognized by the Sultan until the reign of Ismail Pasha. The initially self-declared title was officially recognized by the Ottoman government in 1867, and used by Ismail Pasha, and his dynastic successors until 1914.

The last Khedive of Egypt was Abbas II, but the dynasty of Muhammed Ali continued to rule Egypt, though under British 'guidance'. This ended with the Egyptian revolution of 1952. The last member of the family who ruled was King Farouk I.

All content from Kiddle encyclopedia articles (including the article images and facts) can be freely used under Attribution-ShareAlike license, unless stated otherwise. Cite this article:
Khedive Facts for Kids. Kiddle Encyclopedia.