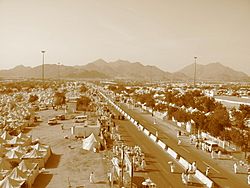 A view of Makkah during the Hajj, with Mt. Arafat in the distance.

Mecca or Makkah (called Mecca in older texts, officially: Makkah al-Mukarramah; Arabic: مكة المكرمة‎code: ar is deprecated ) is a city in Saudi Arabia. 1,294,169 people lived there as of the 2004 census. The city is 73 kilometres (45 mi) inland from Jeddah, in the narrow sandy Valley of Abraham. It is 277 metres (909 ft) above sea level. It is 81 kilometres (50 mi) from the Red Sea.

Mecca is the holiest city in the Islamic world. Every year, millions of Muslims take a pilgrimage to Mecca. This is called the Hajj, where they follow in the footsteps of Muhammad. All Muslims who are able to perform the Hajj are expected to do so at least once in their life. The Kaaba and Masjid al-Haram, the holiest mosque in Islam is here. Mecca is closed to non-Muslims except for some journalists reporting on the Hajj.

The Kaaba, the small cubical building which Muslims pray towards is believed to have been built by Ibrahim and has been a religious center ever since. Muslims believed that God commanded Ibrahim to send his second wife Hajar and her son Ismail there. They found the Zamzam Well which led to people settling nearby, and thus Makkah was born. When Ismail was big enough, he helped his father to build the Kaaba. The Kaaba is the place towards which Muslims turn in prayer. This is known as the Qibla.

All content from Kiddle encyclopedia articles (including the article images and facts) can be freely used under Attribution-ShareAlike license, unless stated otherwise. Cite this article:
Mecca Facts for Kids. Kiddle Encyclopedia.