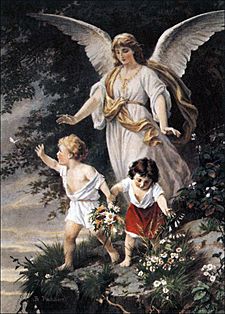 An angel watching over two children. 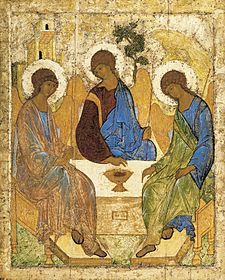 Three angels, in a picture made in about 1420 by the Russian, Andrej Rublev. 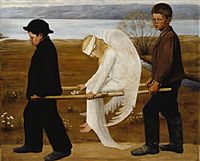 In many mythologies and religions, an angel is a good spirit. The word angel comes from the Greek word angelos which means "messenger". Angels appear frequently in the Old Testament, the New Testament, Qur'an and Aqdas.

Angels are powerful, smart spirits that obey God's commands and praise him with singing and they have male (masculine)gender, but without any sex. They sometimes appear to humans in human form. They can deliver messages to people in person or in dreams. Angels that are named in the Bible are Michael (called a "chief prince"), Gabriel (known for telling Mary that she would be the mother of Jesus), and Raphael (in the Apocryphal Book of Tobit). The Ethiopian Book of Enoch also lists four Archangels which watch over the four quadrants of heaven; Michael, Raphael, Gabriel and Uriel. Lucifer is also known as an angel in the Bible.

Ezekiel 28:13-14 13. Thou hast been in Eden the garden of God; every precious stone was thy covering, the sardius, topaz, and the diamond, the beryl, the onyx, and the jasper, the sapphire, the emerald, and the carbuncle and gold: the workmanship of thy tabrets and of thy pipes was prepared in thee in the day that thou wast created. 14. Thou art the anointed cherub that covereth; and I have set thee so: thou wast upon the holy mountain of God; thou hast walked up and down in the midst of the stones of fire.

It describes the sound of their wings, "like the roar of rushing waters."

Ezekiel 1:7 KJV reveals that they look like man but are different because they have "straight feet" and four wings and four faces.

Ezekiel ch 1, and 10 describe the cherubim creatures ascending and descending from the earth with wheels. Ezekiel 1:14-20 ; Ezekiel 10:16

They are often shown in art as having wings and a halo. The wings represent their speed, and the halo represents their holiness.

The cherubim statue or bronze casting of cherubim in the Temple of Solomon depicted them as two four winged creatures whose wings touched at the peak of the ark that they were making.

The same cherubim creatures were said to be cast in gold on top of the Ark of the Covenant. Casting metal is one of the oldest forms of artwork, and was attempted by Leonardo da Vinci.

The study of Angels is called Angelology.

All content from Kiddle encyclopedia articles (including the article images and facts) can be freely used under Attribution-ShareAlike license, unless stated otherwise. Cite this article:
Angel Facts for Kids. Kiddle Encyclopedia.