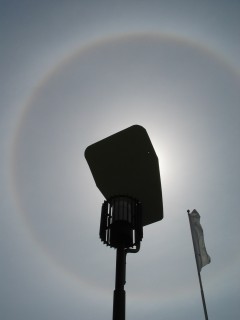 A halo around an object

A halo is a ring of light that surrounds an object. Also, in much religious art, it may be seen surrounding the heads of saintly people such as Jesus.

It is believed by some Hindus that the halo shown around the heads of holy people is a depiction of their "activated" crown chakra.

Halos are visual phenomena that appear near or around the Sun or Moon, and sometimes near other strong light sources such as street lights. There are many types of optical halos, but they are mostly caused by ice crystals in certain types of clouds. The shape of the crystals changes the type of halo seen. Light is reflected by the ice and may split into colors, similar to the rainbow.

All content from Kiddle encyclopedia articles (including the article images and facts) can be freely used under Attribution-ShareAlike license, unless stated otherwise. Cite this article:
Halo Facts for Kids. Kiddle Encyclopedia.