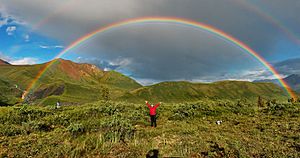 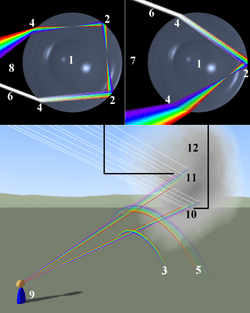 A rainbow is an arc of colour in the sky that can be seen when the sun shines through falling rain. The pattern of colours start with red on the outside and changes through orange, yellow, green, blue, indigo, and violet on the inside. Sometimes a second, larger, dimmer rainbow is seen.

A rainbow is created when white light is bent (refracted) while entering a droplet of water, split into separate colours, and reflected back. A rainbow is actually round like a circle. On the ground, the bottom part is hidden, but in the sky, like from a flying airplane, it can be seen as a circle around the point opposite the Sun.

Rainbows often appear after storms, and are popular symbols for peace in many cultures. 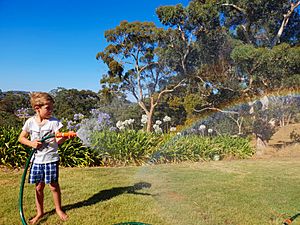 Boy making a rainbow with a garden hose 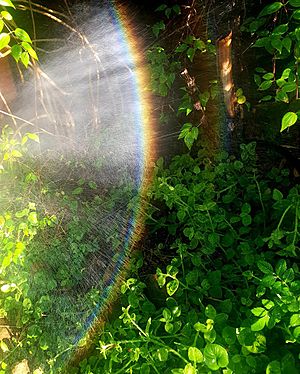 Rainbow in a garden

The rainbow effect can be seen when there are water drops in the air and the sun is giving light at the back of the observer at a low distance up or angle. Rainbows always appear opposite the Sun: they form circles around the shadow of your head (which is the point opposite the Sun).

While sunlight is white, all white light is actually a blend of many different colours. Water and other materials bend the different colours at different angles, some more strongly than others. This is called dispersion. By splitting up white light into its separate colours, rainbows appear colourful even though the source of light hitting them is white.

The rainbow displays with the deepest effect in our minds take place when:

Another common place to see the rainbow effect is near waterfalls. Parts of rainbows can be seen some of the time:

An unnatural rainbow effect can also be made by spraying drops of water into the air on a sunny day.

The seven colors of the rainbow

The rainbow has no definite number of physical colors but seven are traditionally listed. Computer screens cannot show them precisely but can approximate them:

All content from Kiddle encyclopedia articles (including the article images and facts) can be freely used under Attribution-ShareAlike license, unless stated otherwise. Cite this article:
Rainbow Facts for Kids. Kiddle Encyclopedia.