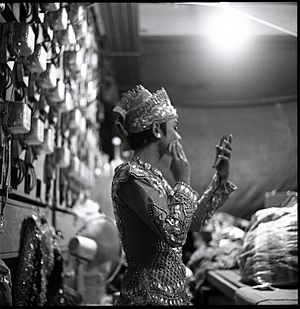 Culture is a word for the 'way of life' of groups of people, meaning the way they do things. Different groups may have different cultures. A culture is passed on to the next generation by learning, whereas genetics are passed on by heredity. Culture is seen in people's writing, religion, music, clothes, cooking and in what they do.

Different countries have different cultures. For example, some older Japanese people wear kimonos, arrange flowers in vases, and have tea ceremonies. Some countries oppose some things in their culture, like discrimination or religion.

For example, immigrants (people who move from one country to another) may keep some of their customs and traditions from their old country. By keeping their culture in this way, they bring pieces of their culture to a new place where others begin to experience it.