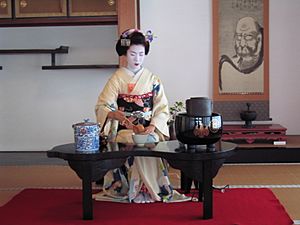 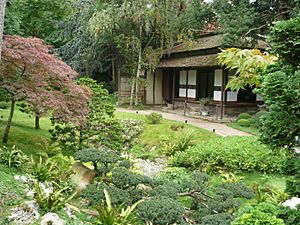 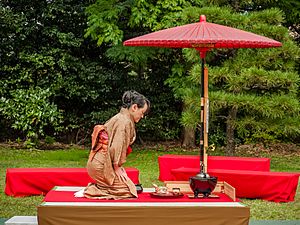 Tea came to Japan from China in about 900 CE. Tea became very popular in Japan, and Japanese people started to grow tea in Japan.

In the 12th century, matcha (green tea powder), became popular. This tea comes from the same plant as black tea.

By the 16th century, all people in Japan, rich people and poor people, liked drinking tea. A man called Sen no Rikyu started teaching the ceremony. Many years have passed, but people still make tea the same way that Sen no Rikyu taught. To tell the truth, there are some schools. Each school (omote-senke, ura-senke, etc.) has told a little different way. 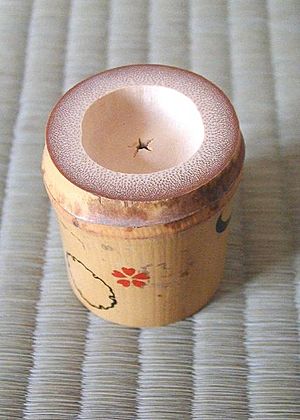 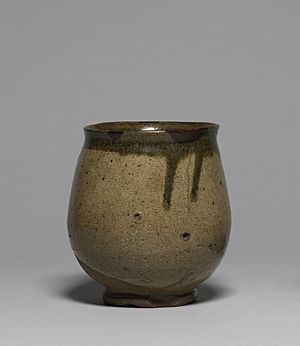 People need many different things for a tea ceremony: 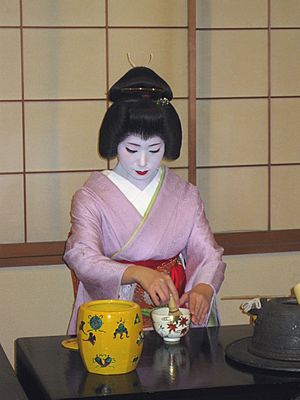 People do the tea ceremony in a special tea room or a special building called a cha-shitsu. Most people wear kimonos.

When people go into the tea room they take off their shoes and sit on special floor mat called tatami.

Cha-shitsu often are very small. The guests (the people who go to the tea ceremony) sometimes eat food and drink special Japanese wine called sake. Before they drink the matcha (green tea) they eat something sweet.

The host (the person who does the tea ceremony) symbolically purifies the tea bowl and the other tea things. Then he or she puts some green tea powder into the tea bowl. The host mixes the tea with hot water. He mixes it with a whisk. The guests drink tea from the bowl.

When everyone has finished drinking tea, the host cleans everything and puts them away. Then the guests leave.

A tea ceremony can take from about twenty minutes to about four hours.

English books about the ceremony

All content from Kiddle encyclopedia articles (including the article images and facts) can be freely used under Attribution-ShareAlike license, unless stated otherwise. Cite this article:
Japanese tea ceremony Facts for Kids. Kiddle Encyclopedia.