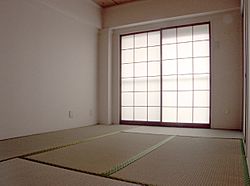 Tatami were originally a luxury item for the rich at a time when lower classes had mat-covered dirt floors. Tatami were gradually popularized. They finally reached the homes of commoners towards the end of the 17th century.

Japanese people have used tatami since the Nara Era (710-794). They were knitted and became thicker like modern tatami. People who lived in the Heian Era stepped onto tatami to show their power and they spread the tatami only in a necessary part of the room.

The use of tatami was a little different from now. The shoin style of traditional Japanese residential architecture began in the Kamakura Era. During this time, people stopped spreading tatami around the room and placing them in the middle. They started to spread tatami through the room. People decided to spread tatami by the hearth and sit erect with their legs folded under.

Tatami has been changing together with people's life style. Tatami became common for people in the middle of the Edo Era. Farmers started to use them in the Meiji Era. The removal of tatami regulation made them more common in the Meiji Era. Japanese people often dry the tatami. If the tatami's surface was discolored, people often turned them over. With the economic growth after World War Two people started to use chairs and carpets. Japanese people think flooring is not relaxing or soundproof enough, so people still use tatami now.

The rush should be dry after harvesting, and keep the peculiar smell and the color of the rush. The rush is selected according to length and the thickness, and it is checked for bruising.

After the harvest ends, tatami is made. Because Japanese rooms are different sizes, tatami are made in different sizes. The base of the tatami is made first. Tatami is woven with a special machine. It similar to the weaving on a kimono. The next part is the wick of tatami, called toko. When the toko is 40 centimeters or more thick, and the shape is straightened. The mat is complete, and that is called mushiro. The tatami is complete when it is joined to the toko and the decoration on the mat edges are sewn.

Igusa is a perennial plant of the family of igusa. Igusa smells good. It has a fresh, grassy smell. In English, they are called rushes. Igusa blooms from May through June. The plant grows up to a length of 100 centimeters or less. They grow in marshes where sunshine is good. In Japan, there are 30 kinds of igusa growing in many different areas.

Tatami is made from natural igusa that must be flexible from the root to the tip, and the thickness and the color varies slightly. About 4000 to 7000 igusa are used for the tatami. Generally the best tatami uses more and longer igusa rushes.

There are many benefits in using igusa such as air purification, heat insulation, elasticity, cooling (especially in hot summer seasons), eco-friendly and sound absorbing qualities. Igusa tatami is also smooth to the touch, so it is comfortable for babies and young children. Most Japanese like tatami. Many homes have at least one tatami room.

Tatamiberi is the cloth that covers the edge and also decorates the tatami. Some tatami don’t have it. In English, it is called the mat edge. The width of tatamiberi is about three centimeters. The material on the tatamiberi is cotton yarn, a synthetic material string, and a gold thread. The features change according to what strings are combining with tatamiberi. The woven beautiful color handle sets off the room. There are two types, and the atmosphere of the room changes by the tatamiberi.

There are many kinds of tatamiberi. But tatamiberi was used to show status. For example, the emperor, ministers, priests, and scholars had different styles. It was recorded in "Amanomokuzu" in 1420.

All content from Kiddle encyclopedia articles (including the article images and facts) can be freely used under Attribution-ShareAlike license, unless stated otherwise. Cite this article:
Tatami Facts for Kids. Kiddle Encyclopedia.