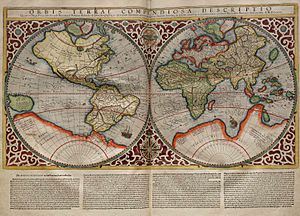 The world map by the Italian Amerigo Vespucci (from whose name the word America is derived) and Belgian Gerardus Mercator shows (besides the classical continents Europe, Africa, and Asia) the Americas as America sive India Nova, New Guinea, and other islands of Southeast Asia, as well as a hypothetical Arctic continent and a yet undetermined Terra Australis.

The Islamic gunpowder empires: Mughal Army artillerymen during the reign of Jalaluddin Akbar

The 16th century (or XVIth century) begins with the Julian year 1501 (MDI) and ends with either the Julian or the Gregorian year 1600 (MDC) (depending on the reckoning used; the Gregorian calendar introduced a lapse of 10 days in October 1582).

The 16th century is regarded by historians as the century in which the rise of Western civilization and the Age of the Islamic Gunpowders occurred. The Renaissance in Italy and Europe saw the emergence of important artists, authors and scientists, and led to the foundation of important subjects which include accounting and political science. Copernicus proposed the heliocentric universe, which was met with strong resistance, and Tycho Brahe refuted the theory of celestial spheres through observational measurement of the 1572 appearance of a Milky Way supernova. These events directly challenged the long-held notion of an immutable universe supported by Ptolemy and Aristotle, and led to major revolutions in astronomy and science. Galileo Galilei became a champion of the new sciences, invented the first thermometer and made substantial contributions in the fields of physics and astronomy, becoming a major figure in the Scientific Revolution.

Spain and Portugal colonized large parts of Central and South America, followed by France and England in northern America and the lesser Antilles. The Portuguese became the masters of trade between Brazil, the coasts of Africa, their possessions in the Indies and the Moluccas in Oceania, whereas the Spanish came to dominate the greater Antilles, Mexico, Peru, and opened trade across the Pacific Ocean, linking the Americas with the Indies. English and French corsaires began to practice persistent theft of Spanish and Portuguese treasures. This era of colonialism established mercantilism as the leading school of economic thought, where the economic system was viewed as a zero-sum game in which any gain by one party required a loss by another. The mercantilist doctrine encouraged the many intra-European wars of the period and arguably fueled European expansion and imperialism throughout the world until the 19th century or early 20th century.

The Protestant Reformation in central and northern Europe gave a major blow to the authority of the papacy and the Catholic Church. In England, the British-Italian Alberico Gentili wrote the first book on public international law and divided secularism from canon law and Catholic theology. European politics became dominated by religious conflicts, with the groundwork for the epochal Thirty Years' War being laid towards the end of the century.

In the Middle East, the Ottoman Empire continued to expand, with the Sultan taking the title of Caliph, while dealing with a resurgent Persia. Iran and Iraq were caught by a major popularity of the Shiite sect of Islam under the rule of the Safavid dynasty of warrior-mystics, providing grounds for a Persia independent of the majority-Sunni Muslim world.

In the Indian subcontinent, following the defeat of the Delhi Sultanate empire and Vijayanagara Empire, new powers emerged, the Suri Empire founded by Sher Shah Suri, Deccan sultanates and the Mughal Empire by Emperor Babur of Mughal Dynasty, a direct descendant of Timur and Genghis Khan. His successors Humayun and Akbar, enlarged the empire to include most of South Asia. The empire developed a strong and stable economy in the world, leading to commercial expansion and greater patronage of culture, which significantly influenced the course of Indian history.

Japan suffered a severe civil war at this time, known as the Sengoku period, and emerged from it as a unified nation. China was ruled by the Ming dynasty and came into conflict with Japan and Japanese piracy over the control of Korea.

Note: years before or after the 16th century are in italics.

All content from Kiddle encyclopedia articles (including the article images and facts) can be freely used under Attribution-ShareAlike license, unless stated otherwise. Cite this article:
16th century Facts for Kids. Kiddle Encyclopedia.